My mum and dad celebrate their 60th wedding anniversary today. What an incredible feat of love and endurance! As is their style they opted for a no fuss approach, eschewing a party or any such public hoo-ha.

So what to give a beloved couple who have everything as a gift for their diamond wedding anniversary?

Well, apart from each other (and me), the most precious thing in their lives is their delightful little dog Sam. I decided to make them a four panel fold out greetings card with Sam as the star. 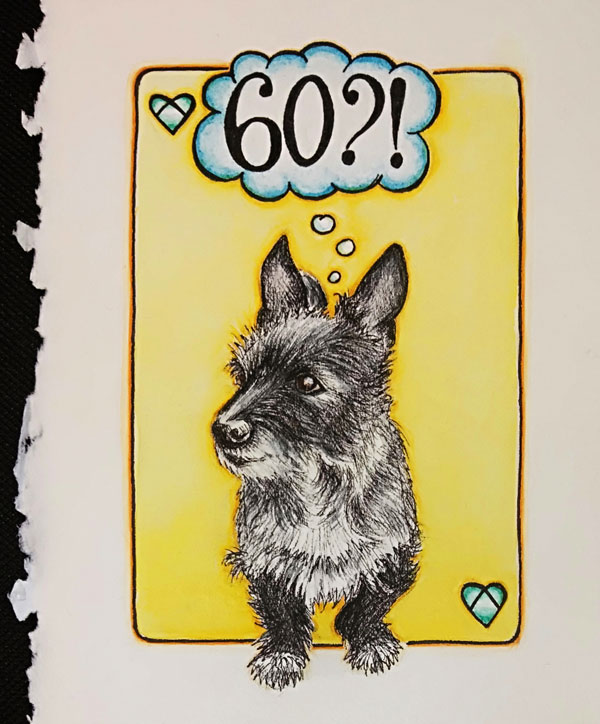 My dad often wonders what Sam is thinking…

He is a clever little chap but mental arithmetic probably doesn’t take up much of his time!

Apparently, multiplying by seven is no longer a valid way to convert human years into dog years. Dogs age more rapidly in the first few years of their lives so it’s necessary to apply the above equation. 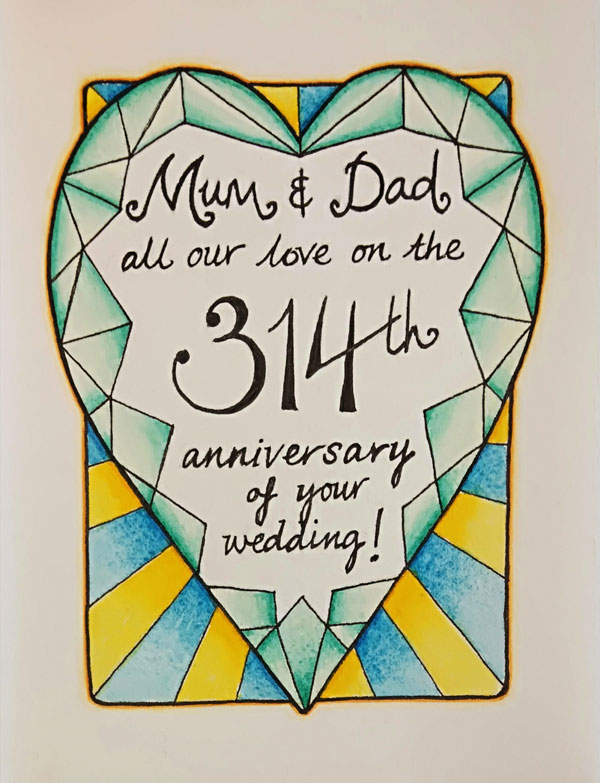 As a confirmed spinster, my parents’ long and successful marriage has been a source of admiration and incredulity to me for me ages. I’ve previously written ‘Happy 100th Wedding Anniversary’ in their cards as a joke so the dog years conversion is just an exaggeration of that. That Sam is my only sibling is also a family joke. 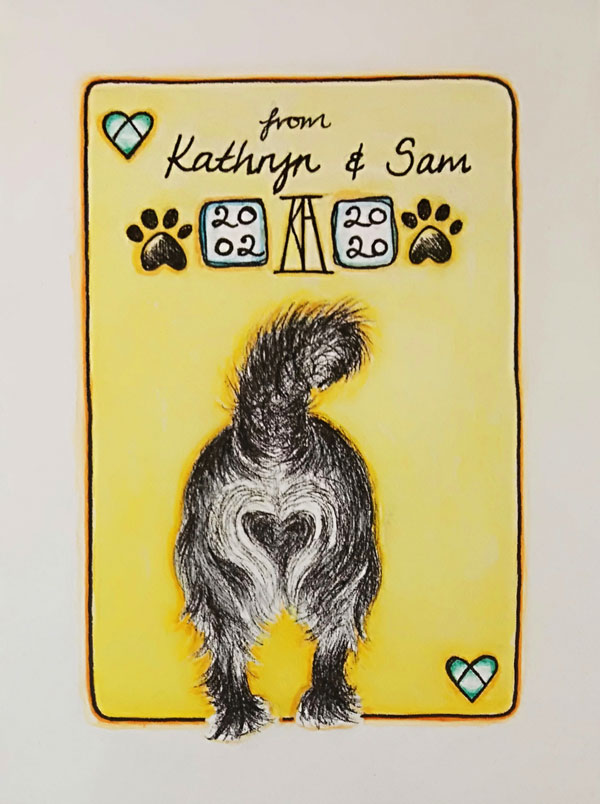 And it just so happens that Sam does have a heart-shaped hairstyle on his bottom, my mum recently mentioned how beautiful it is…

How romantic and appropriate! 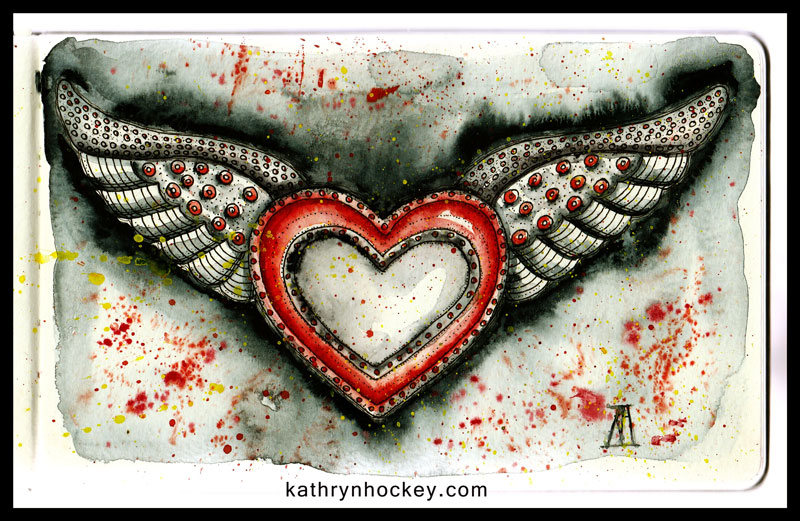 To mark Valentine’s Day I made this pen and watercolour sketch of a tin heart mirror I brought back from Mexico.

May your heart have wings today and everyday…. 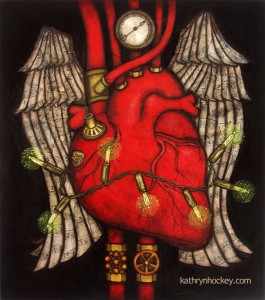 About a week after my Dad had a mild heart attack in the spring of 2014 he had an angiogram to find out which of his coronary arteries might need stents to open them up and improve the blood flow to his heart muscle.  He asked the cardiologist if the stents would stop his supraventricular tachycardia – also known as SVT, a sudden acceleration of the heart rate which usually resolves without treatment and causes no harm.

The cardiologist replied “No, this is plumbing and that’s wiring”.

When my Dad told me the story this picture sprang to my mind, almost fully formed.

I started by researching related images and sticking them in my sketchbook and then set about making some sketches. 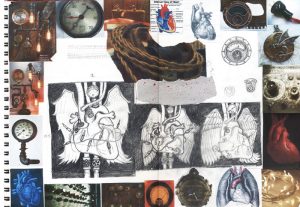 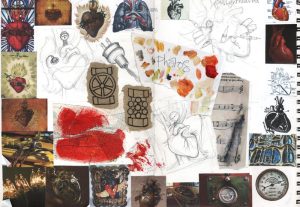 The power switch and plug represent the sinoatrial node, or pacemaker, which is the area of heart tissue that generates the electrical impulses which cause the heart to beat. My Mum has had a pacemaker fitted so this part also refers to her.

The fairy lights are a celebratory representation of the electrical impulses which drive the heart, they are also inspired by the ring of flowers or thorns which typically adorn a sacred heart and by the nostlgia for the childhood Christmas times when my Dad would take the lights down from the loft, untangle them and replace the dud bulbs ready for my Mum and me to decorate the tree.

Once I was happy with the basic layout I enlarged the rough drawing, 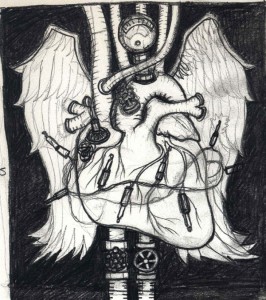 traced it onto my working surface and began to collage. 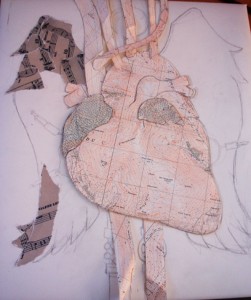 I used sheet music for the lungs/wings because music, lungs and wings all need air to work properly.

The map which forms the background for the heart and blood vessels is of the Brecon Beacons, my Dad used to lead trekking holidays there for apprentices of the engineering company where he worked as a training instructor. He told me that he’d had a clear out of his old maps and I said “I’ll have them!” but he’d already taken them to the charity shop so I went straight there and bought them back.

Once the lungs/wings were collaged I added charcoal outlines and stuck on the map pieces. 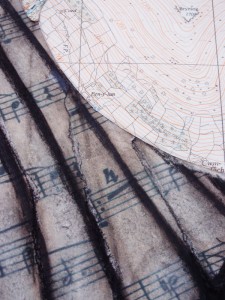 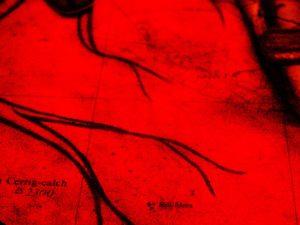 All the plumbing and electrical components were made in the same way:

I drew them onto thick paper, 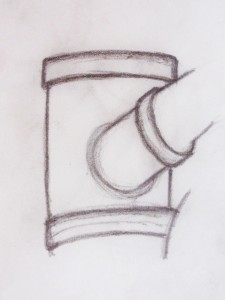 applied a wash of acrylic paint and reinforced the outlines and shading with charcoal, 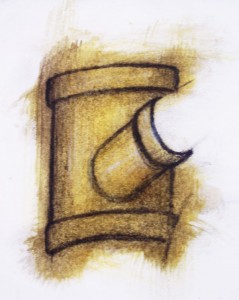 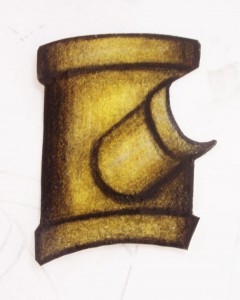 and stuck them on. 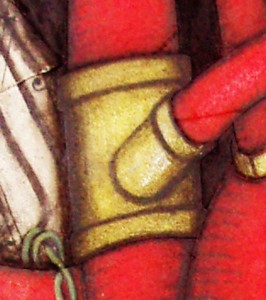 The electrical flex and glow from the fairy lights are painted with acrylic.

Working  with collage, drawn collage, acrlyic paint and charcoal in this way was really fun and liberating.