I must admit that I was exhausted by the end of my stay in Hampi. Tired of the heat, tired of traveling alone and tired of the attention of strangers; getting shouted at from a distance and asked to pose for a selfie had lost its curious charm.

I also had a creeping nausea, mild upset stomach and complete lack of desire to sightsee or draw.

I guess you could call it ”travel fatigue” and I figured that I needed a safe and comfortable place in which to rest and wait for it to pass without losing heart or forcing the issue.

I decided to head for Bundi (Rajasthan) to catch up with the friend I’d made in Bikaner in November; to enjoy some honest conversation and easy company.

I got a sleeper bus from Hampi to Bengaluru (surprisingly comfortable) and spent a few hours relaxing at a suburban health food cafe (they even had a hammock for a nap) until it was time to head for the airport and fly to Jaipur. 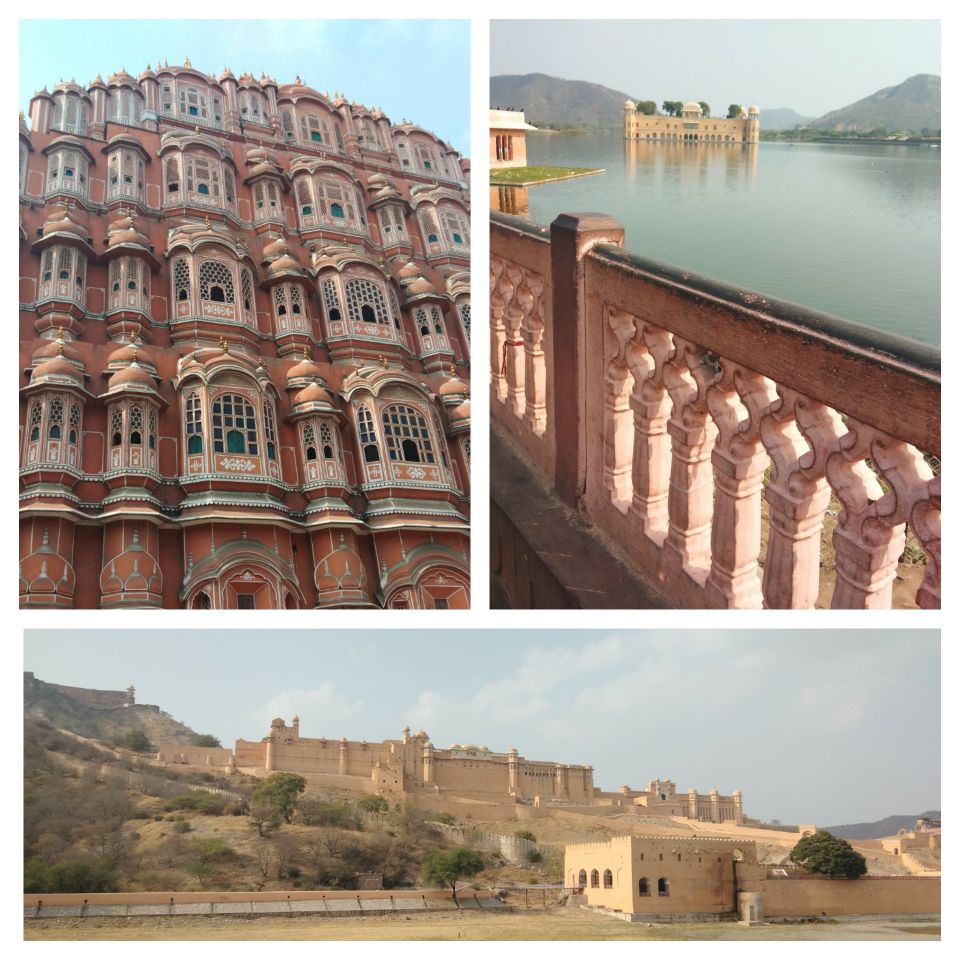 Having spent a comfortable night in a hotel close to Jaipur airport I took a listless taxi tour of the main sites of the city before boarding the evening bus for Bundi.

The Bundi bus turned out to be a ‘fly by’; without warning the driver let me out (alone) on the highway at midnight with vague directions to try the nearby train station for onward transport into town.

As luck would have it there were two guys on the other side of the road; one waiting for the bus to Jaipur and the other (having dropped the first guy off) about to drive back to Bundi. 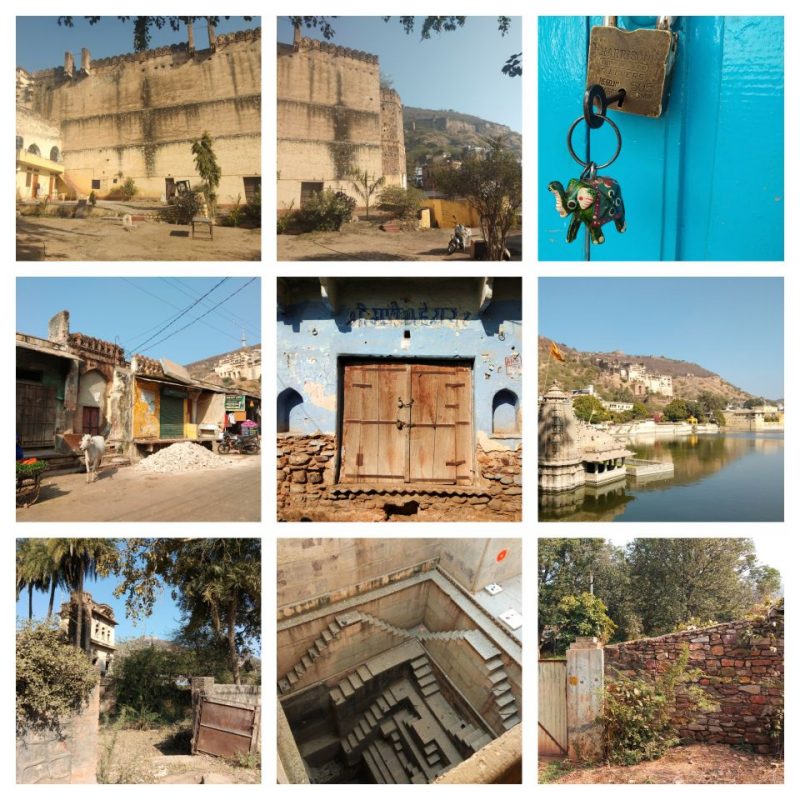 I rented a charming but basic room at a guest house converted from the old elephant stables right next to Garh palace. A comforting slide into a lax routine ensued: gently exploring the beautiful town and sharing street food snacks with my buddy. Such a relief not to have to watch my back and field questions all the time. 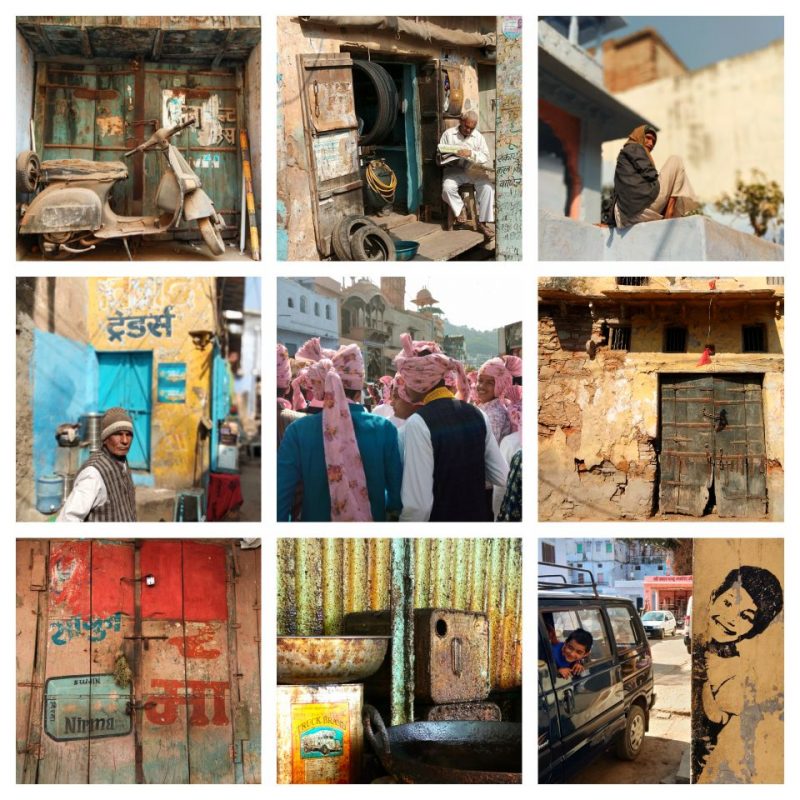 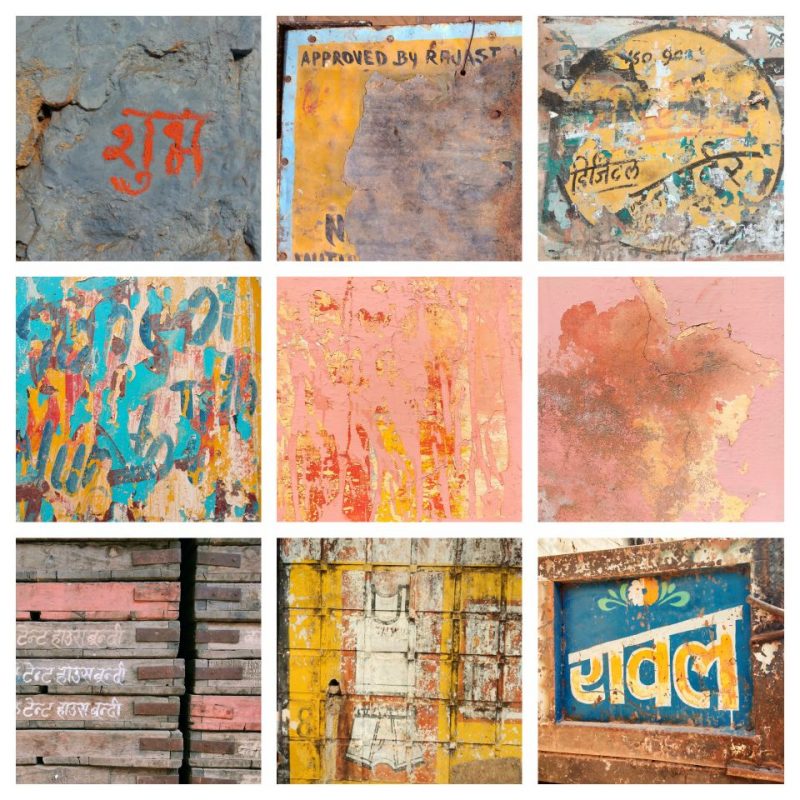 Bundi may be extraordinarily beautiful but it’s not spared the mountains of filth and litter that are ubiquitous in India. The culture of “drop it for someone else to deal with” is so at odds with the anti-litter campaigns we were subjected to in the UK during the 70’s that the sight of the rubbish never ceases to be shocking; especially so when it’s in a rural setting and / or  it’s being consumed by cows. 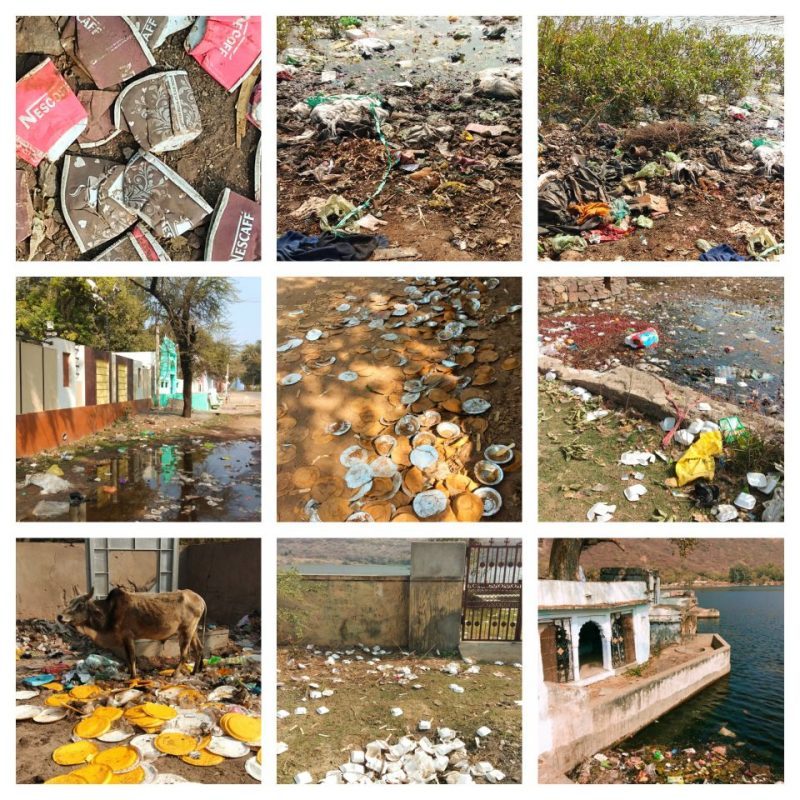 I deliberately cropped the garbage out of countless otherwise stunning views but today I decided to make it a feature. 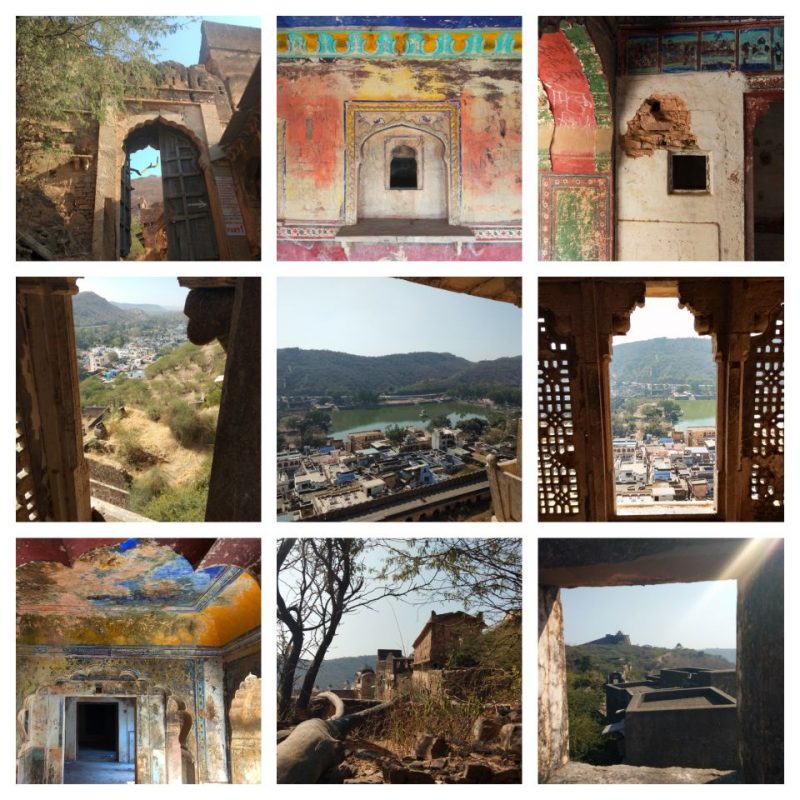 Taragarh Fort above Bundi is one of the oldest and largest in India; the uphill trek past the palace to reach it (the guide books recommend taking a stick to ward off potentially aggressive monkeys) is well worth the effort. You’re treated to feeling like an intrepid explorer as you step carefully through the unchecked undergrowth and gingerly tackle crumbling staircases to encounter deliciously dilapidated ancient wall paintings and ever elevated vantage points from which to gaze over the city. Bundi is much bluer than Jodhpur which is famed for its blueness.

Bundi also has an impressive number of step wells, many of which are in a good state of repair and free to visit. When the water table was higher they were filled with fresh water and people would descend the beautifully symmetrical steps which line their sides to collect it.

Around a week later, feeling refreshed (if no more motivated to draw) I set off for Delhi by overnight train. My mission was to pick up my travel companion for the second half of the trip. 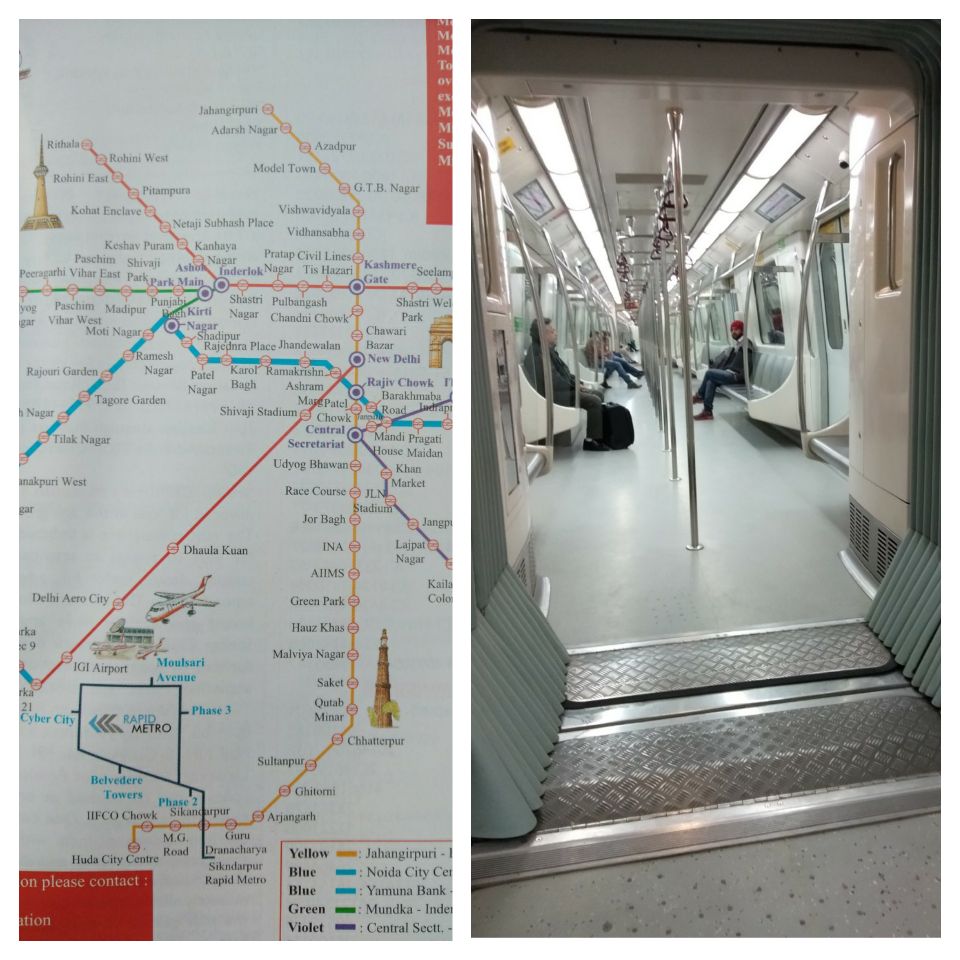 The New Delhi metro is wonderfully clean and efficient and is easy enough to negotiate at 6am, even after a night on a train and with a map in Hindi (note the colours, count the stops).

The hotel tried to fob me off with a dark little room that stank of damp so I stepped out for breakfast to give them the time to come up with a better option, i.e. the room I’d actually booked.

It was then that I discovered that my travel bank account had been cleaned out by a card fraudster. Luckily I had a backup bank account; luckier still the first bank responded swiftly and refunded the stolen money within a couple of days.

My travel companion’s flight was delayed by 20 hours due to a bungled Aeroflot transfer in Moscow. I took the opportunity to sleep. We were both delighted and relieved when we finally did meet up at Indira Gandhi Airport.

We set off on the six hour drive to Rishikesh (Uttarakhand) the following morning in a cab with no driver’s side wing mirror and half a rear number plate. By the time we were clear of the Delhi smog we had full faith in the skills of Ashok, the man behind the wheel. 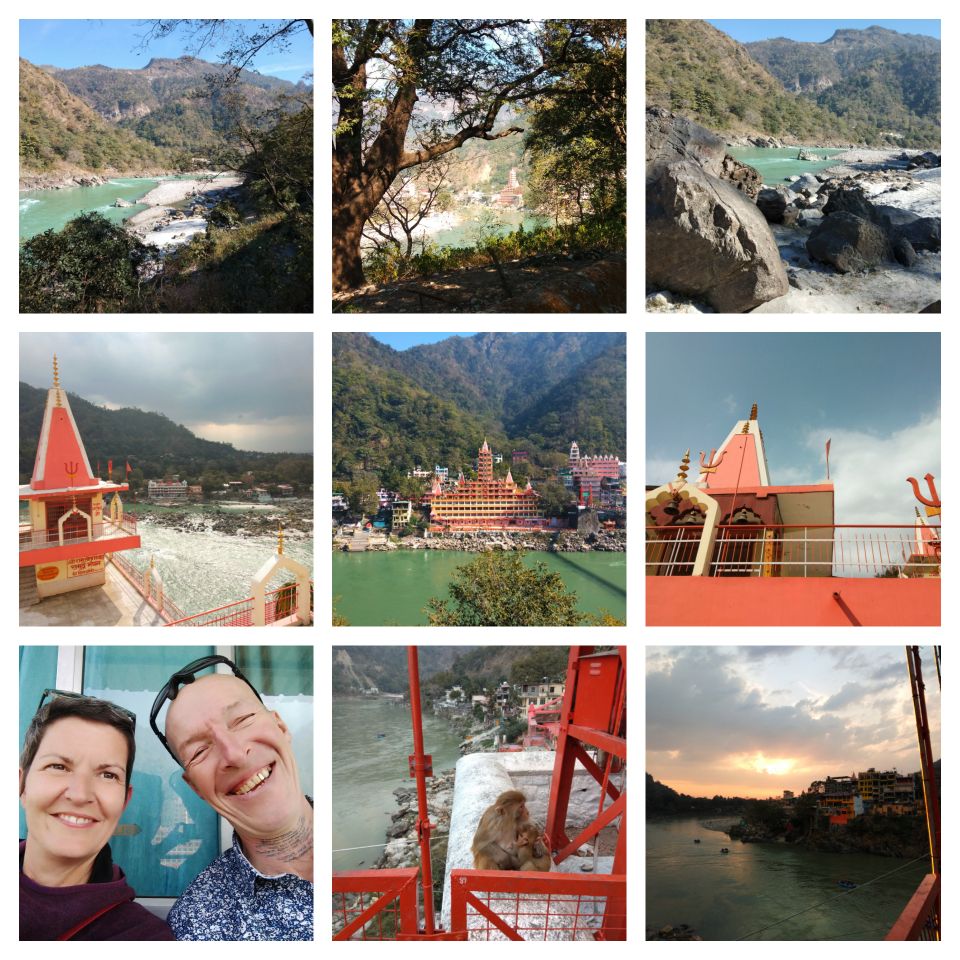 Several people had recommended Rishikesh as an unspoilt beauty spot which attracts chilled out travelers into yoga and meditation (neither of which we intended to do formally).

It didn’t disappoint. We enjoyed gentle hikes along the banks of the Ganges, good food and the evening spectacle of the Hindu temple rituals.

It was chilly however, so we opted to travel south when the time came to move on.

My friend from Bundi and Bikaner had also moved on – he was by now in Khajuraho, a town famed for its elaborately and erotically carved ancient temples and spring dance festival. We decided to pay him a visit and booked a rail route via Varanasi. 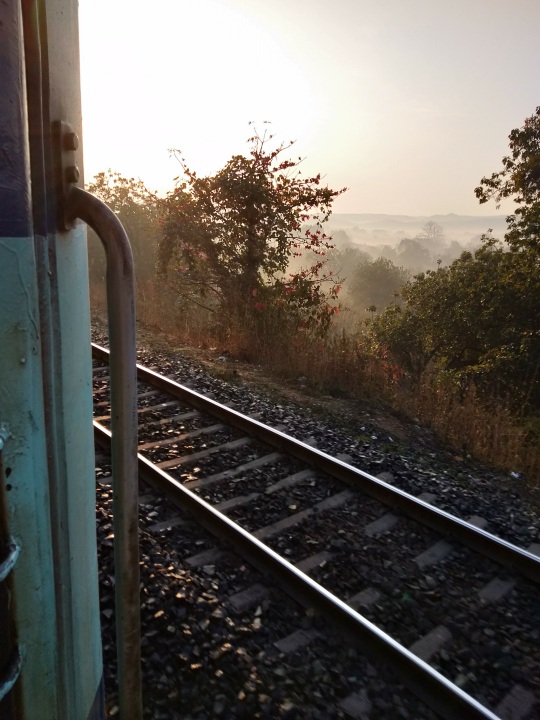 A note on train travel in India

The railway network is vast and runs well. Even journeys of 12+ hours can be very comfortable if you prepare properly.

Delays are notorious, so are hideous toilet stories but my experience with both has been thankfully mild (reek of urine excepted).

Wear modest, comfy clothes in layers, pack a book, water (they do sell it on board), fruit and snacks (they sell food on board too, but without seeing how it’s prepared I’m wary), toilet paper, hand sanitizer, a lock and chain for your luggage – security eases the mind. Also keep your valuables tucked in your pants at all times (except during inevitable and hopefully brief toilet visits).

The Indian Railways website  is tricky to negotiate. I persevered long past my usual patience limit and managed to register myself as a user but couldn’t pay for the tickets I wanted because they don’t accept foreign credit / debit cards. Hmmm.

So I booked train tickets on third party websites, through hotels and travel agents and at train stations (make sure you know the train number and that you have your passport with you). This man (in seat 61) is an expert on Indian train travel.

Tickets sell out pretty fast on popular routes so it pays to book well in advance. There are slim allowances for last minute plans but the numbers of seats are limited and they cost extra. Tatkal tickets are released the day before travel at 10am and you need a sharp agent with good karma to catch one. Tourist quota tickets can only be booked at railway stations and are similarly limited.

First class carriages are divided into compartments with two or four berths and lockable doors; obviously these tickets are the most expensive. Not every train route runs with a first class carriage so it may not be an option.

Second and third class carriages with air-conditioning (2AC and 3AC) are both comfortable. They’re divided by curtains into compartments which contain four berths (in two tiers) and six berths (in three tiers) respectively. There are also two more berths on the other side of the corridor which runs the length of the carriage.

All AC sleeper berths come with cotton sheets (in a paper bag from the laundry), a pillow and a blanket. The aircon can be pretty harsh so socks and a hat may be useful too.

Book an upper berth if you’re traveling alone. It affords more privacy and you can still lie down during the daytime stretch of the journey if you want; it’s mandatory to share a lower berth as a bench seat with other travelers in the same compartment during the day.

The middle berths in 3AC are supported by chains and are folded back to the wall during the day to allow enough space for passengers to sit up on the the lower berth.

Standard sleeper carriages do without AC by having no glass in the windows. Passengers there are expected to bring their own bedding. Not for the faint hearted.

There’s something very comforting about settling into your berth for a night on the train. The relief that the train has turned up on the correct platform and that it’s leaving more or less on time gives a sweet glow…as does having a well stocked snack bag and pretty much nothing to do. Rock on.

For shorter ‘local’ journeys you can buy your ticket for a simple seat at the time of travel. 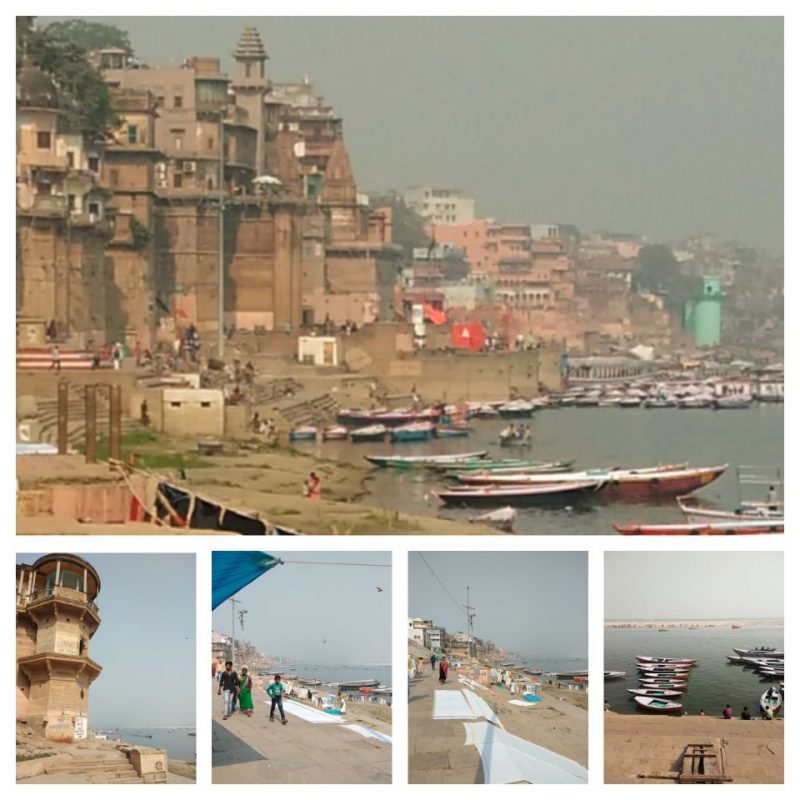 So, back to Varanasi…it was absolutely choked with traffic, filthy and weirdly religious to our secular western eyes. We lodged in a homestay with a balcony overlooking the neighbourhood wedding garden; two nights in a row we had front row seats for the fascinating festive goings on with an ear splitting sound track of Hindi pop hits and the waft of delicious feast smells.

From Varanasi we trained it to Satna and overnighted in the filthiest shit hole guesthouse I have so far encountered. Luckily for one night only as I couldn’t bring myself to brush my teeth in that bathroom or undress to sleep.

We skipped the complimentary breakfast and caught the morning bus to Khajuraho. A four hour bone rattling journey in a thundering old machine driven by a tiny man who expertly multi-tasked. Hooting the horn, spitting betel juice out the window, swerving to overtake slower vehicles and avoid dogs and cyclists. 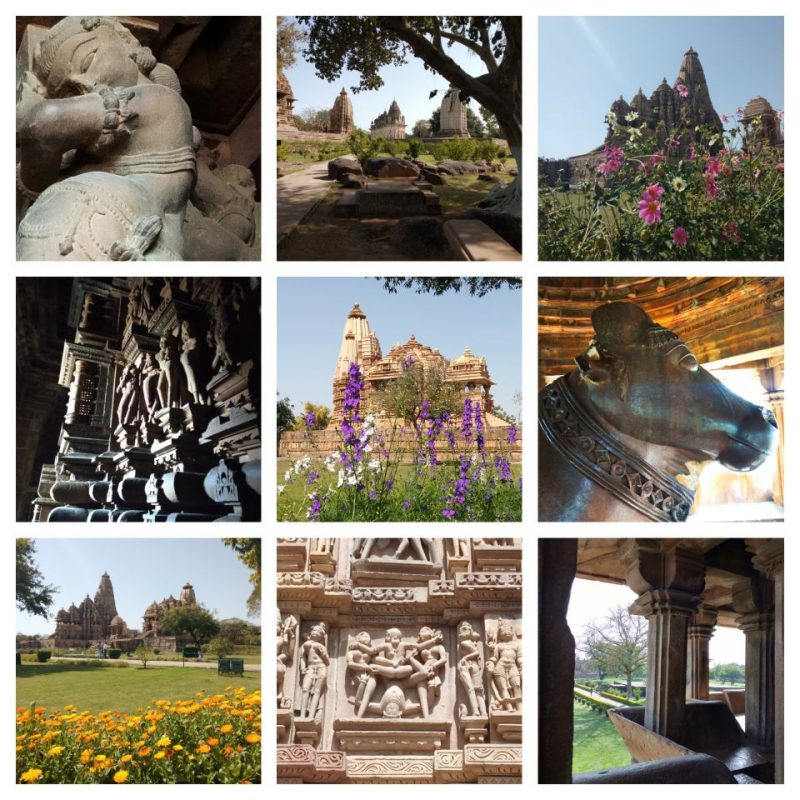 There are astoundingly intricate stone carvings to be found on temples in all corners of Khajuraho. The most impressive cluster of temples is the Western Group; there’s a modest fee to enter the spotlessly clean and well manicured compound.

Khajuraho has the air of a town where the number of residents who want to make a buck from tourism exceeds the number of tourists needed to make the equation comfortable. So the hassle factor was pretty high. 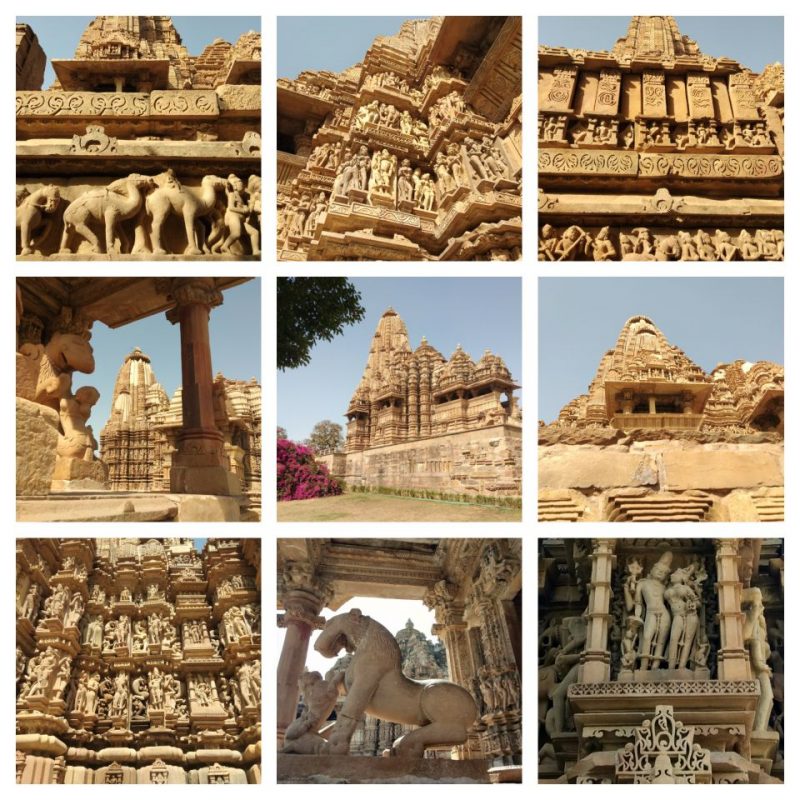 We did have fun exploring, we ate well, we enjoyed the company of my buddy and his local friends with whom we played badminton and attended (yet) another wedding. We saw some delightful classical dance performances and both suffered mercifully short bouts of d&v (unconnected). 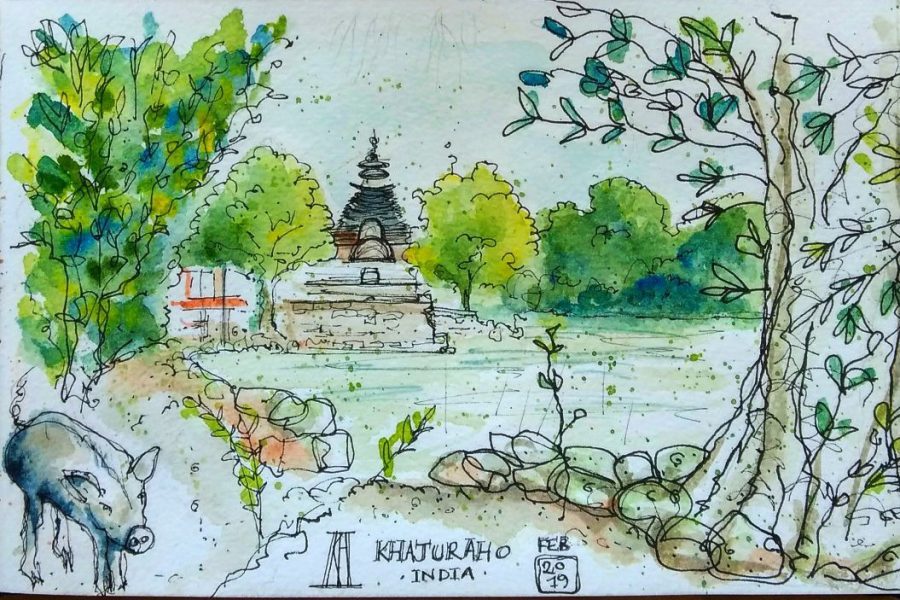 My sketching mojo returned one day while I was wandering about the outskirts of town. A modest doodle but a relief nevertheless. 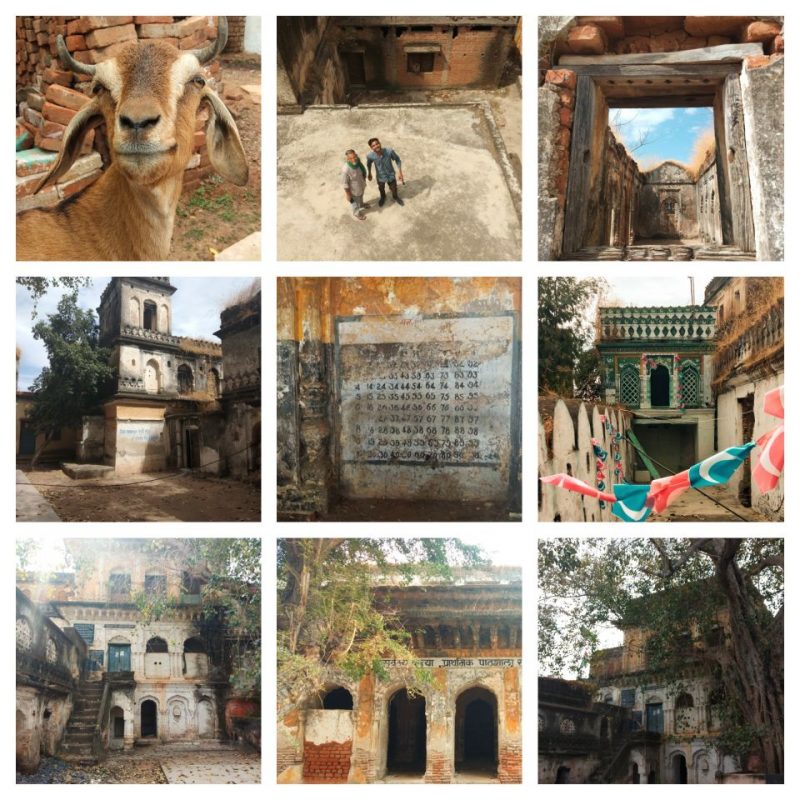 The day before we left Khajuraho we went to Rajnagar to eat a delicious lunch at the family home of a lovely young man who worked at our hotel, he also showed us around the gorgeous ruined fort there. Lovely.