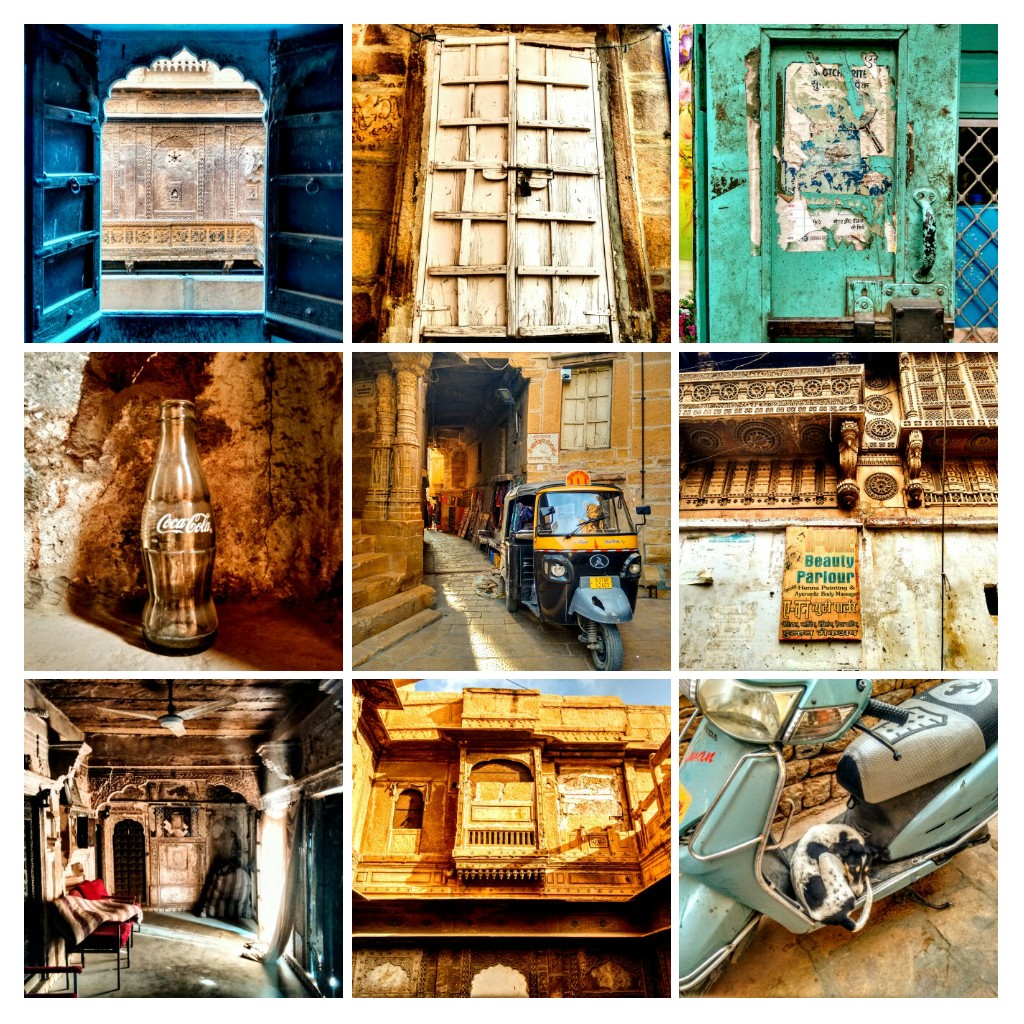 I chose to do a Workaway at a hostel in Jaisalmar because I wanted to go on a desert safari and the hostel owner said he wanted some help to decorate the rooftop terrace (along with some basic IT tasks).

When I got here it was apparent that many people had already contributed to the roof terrace decoration…some in a lovely way, some in quite a haphazard way! 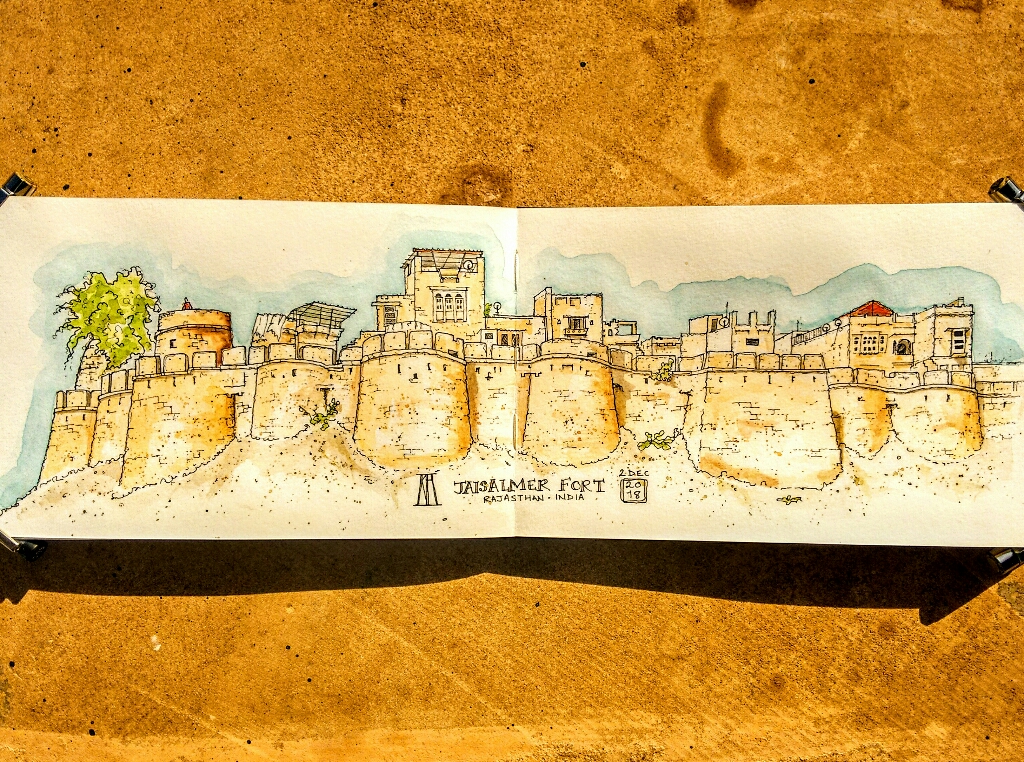 So, my exclusive rights to the wall space scuppered I set about capturing the beautiful view (above) of the fort while planning my strategy for mural painting in limited areas amongst a hotch-potch of other images. 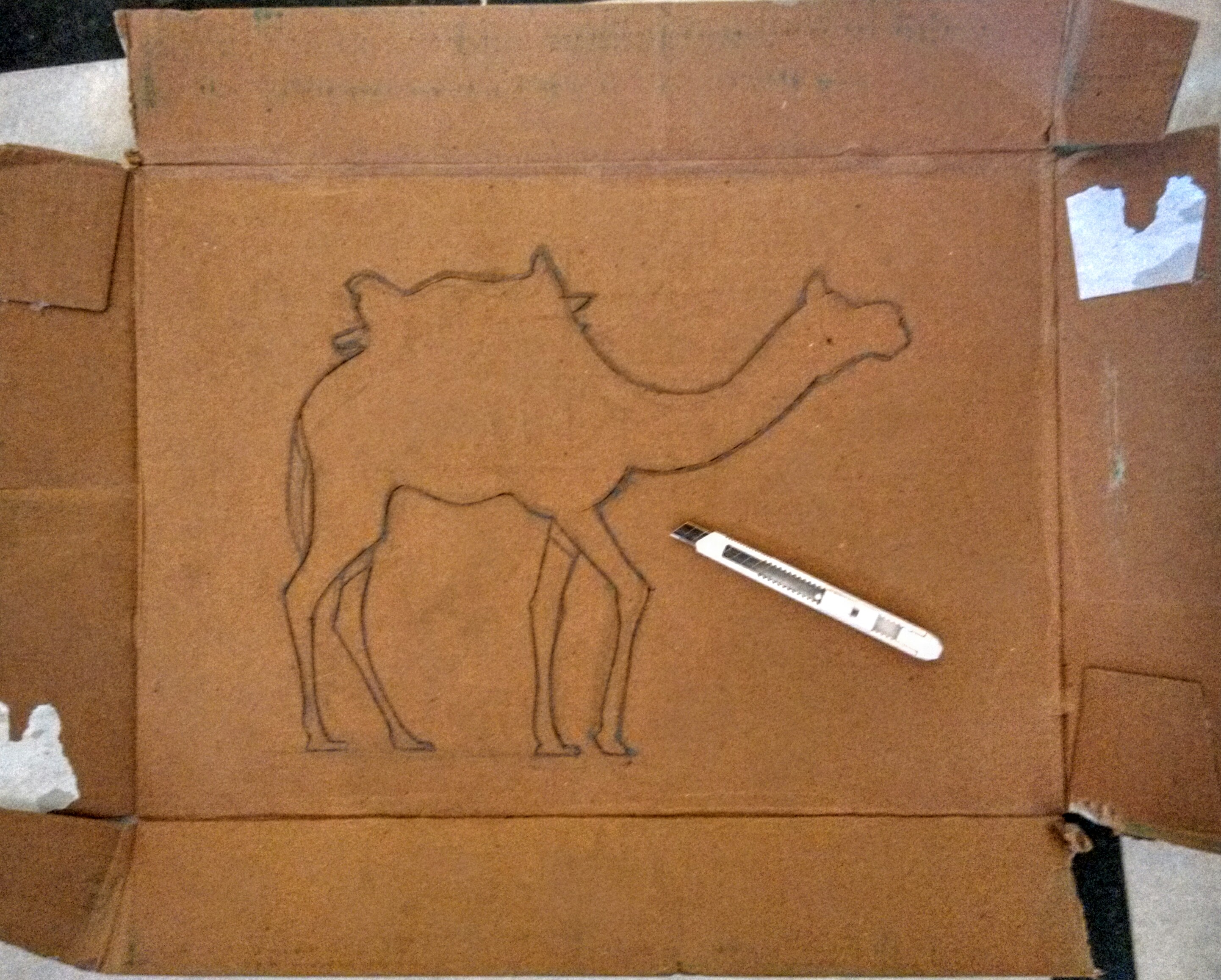 I decided on a stencil with the .most obvious theme for a desert safari hostel – the camel. 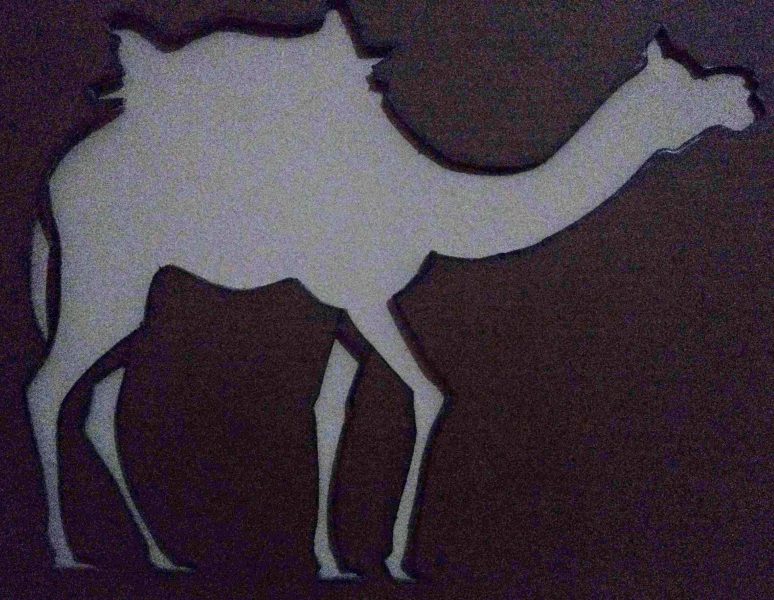 I found a craft knife and the lid of a photocopy paper box in the market by the fort and set about preparing my template. 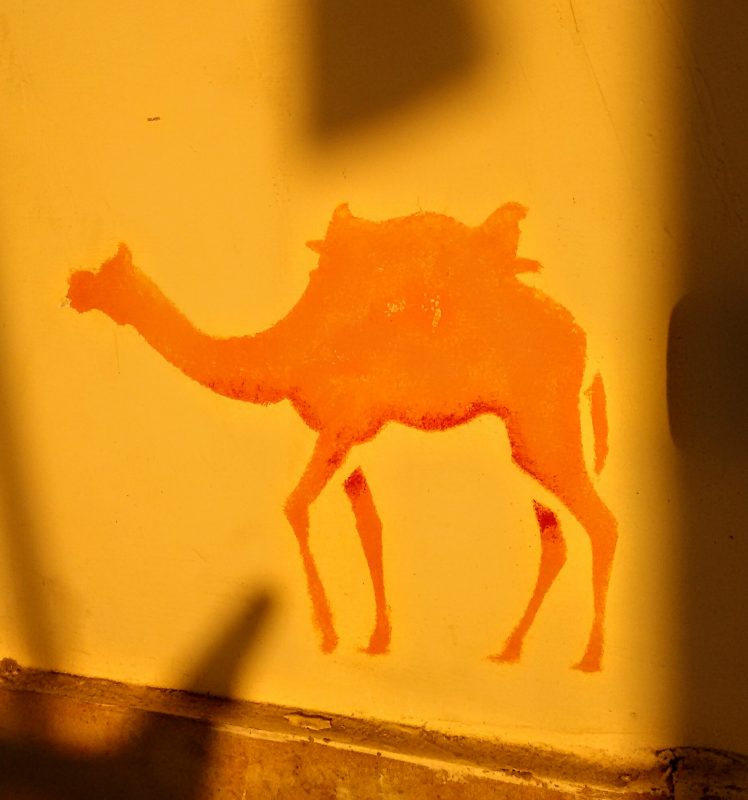 Having painted several camels, a bit of red shading and yellow highlighting  I added a border inspired by a Rajasthani folk art design. 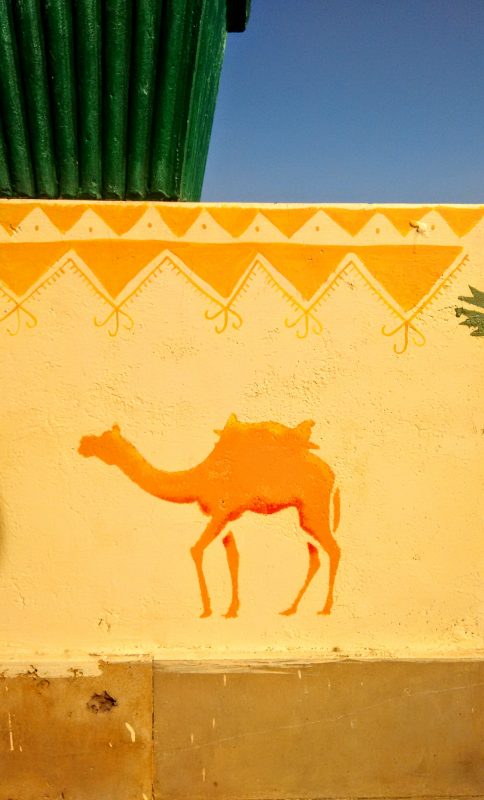 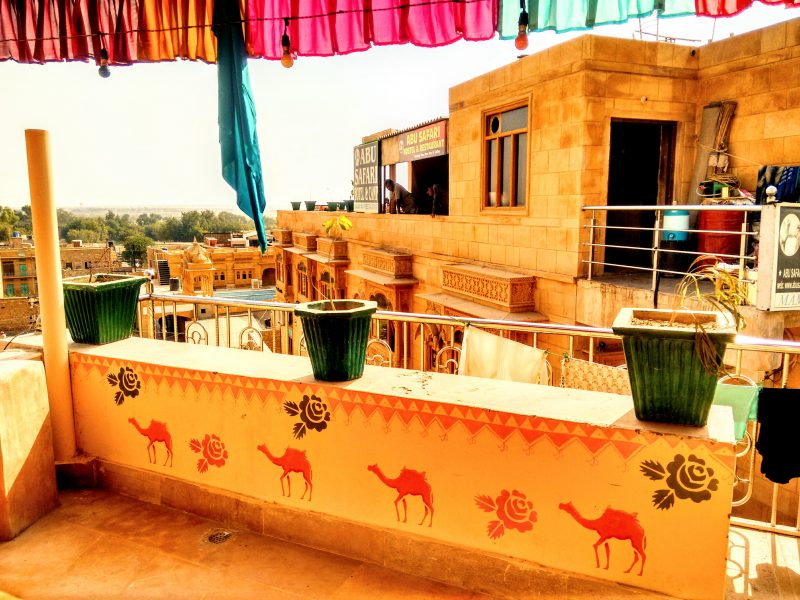 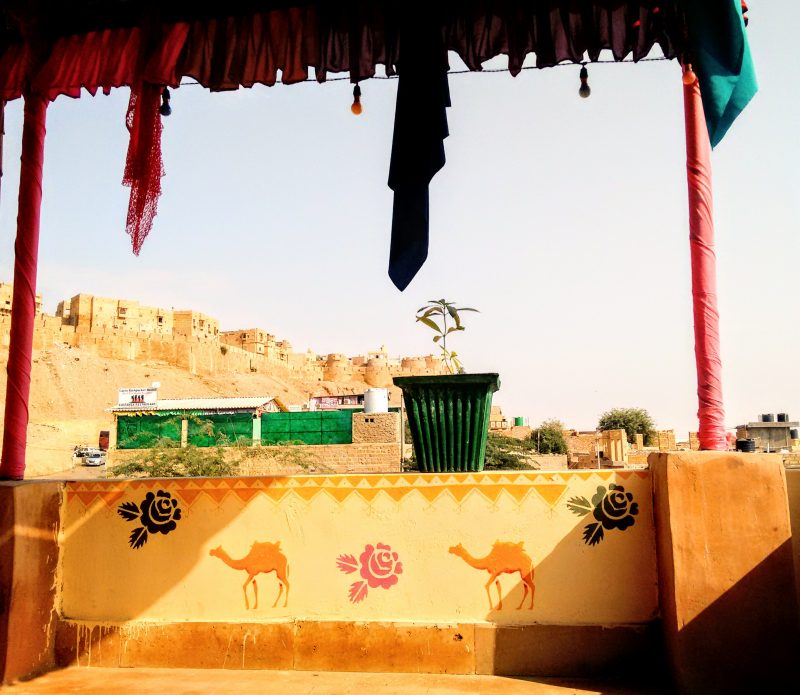 I did go on a camel safari, it was tremendous fun if a little hard on the thighs. Even though we didn’t venture very deep into the Thar desert the peace and vastness of the landscape were still impressive. We had chai on the dunes while watching the sunset, then ate dinner around a campfire before settling down to sleep under the stars. Gorgeous. 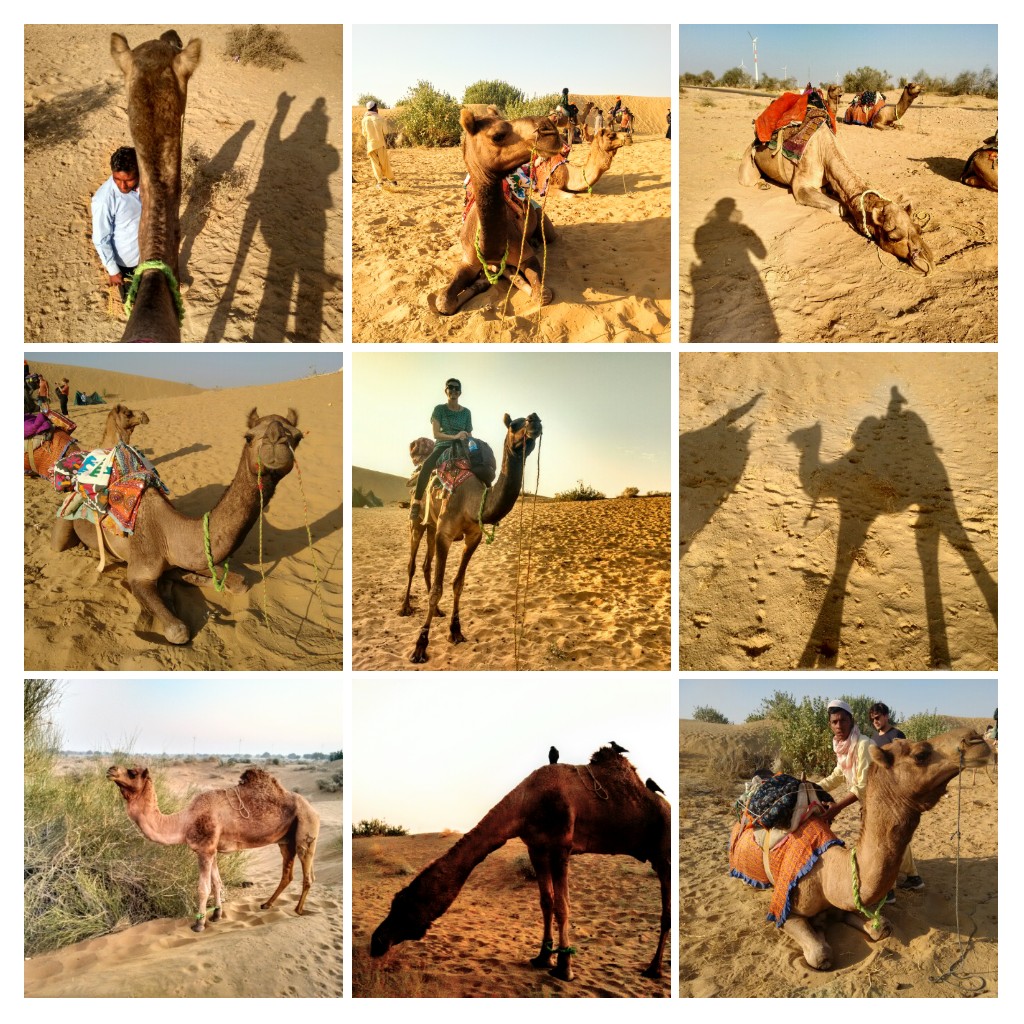 While wandering around Jaisalmar old town I was struck by the number of Ganeshes painted on the houses. 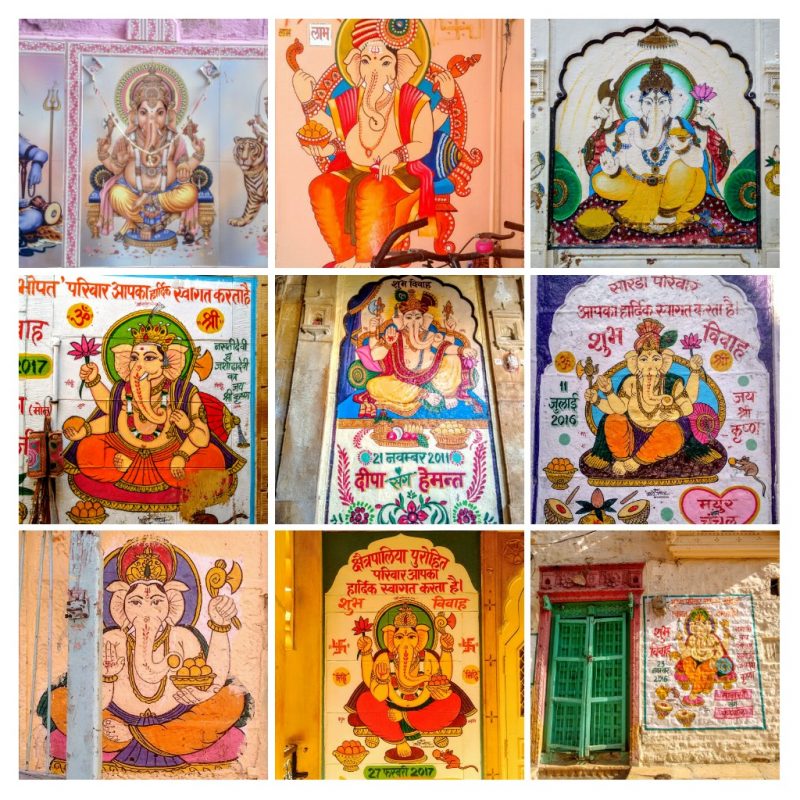 Then someone told me that since Ganesh is the Hindu god that removes obstacles and blesses new starts the people get him painted on their houses every time there’s a wedding.  In fact the paintings serve as a kind of invitation since they contain the names, date and location of the union. Ah-ha! 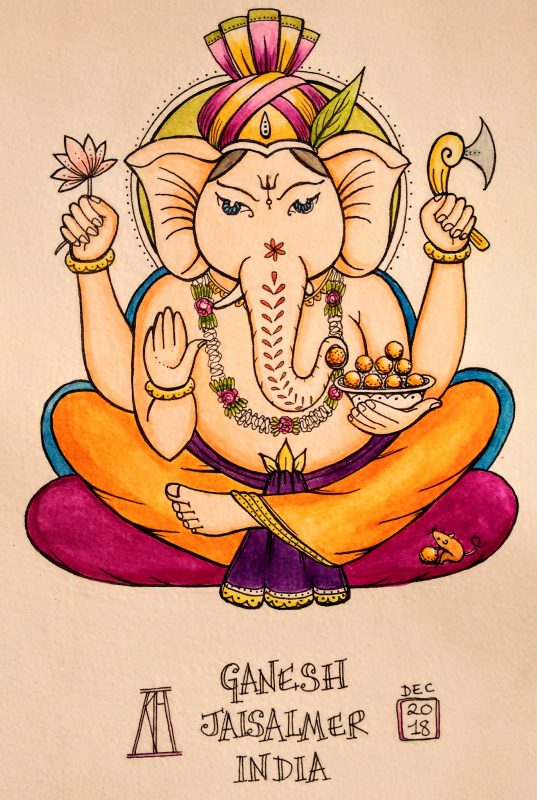 Then I got invited to a wedding! I went up to the fort for a massage, my second in a week since hard beds, overnight travel and painting have taken their toll on my middleaged bones. There’s a team of sisters who offer Ayurvedic loveliness in their home but the house was very busy when I got there so I expected to be turned away. One of the sisters explained that they were preparing for her niece’s nuptials and I got my massage and an invitation to the part of the wedding ceremony which would take place two days later. 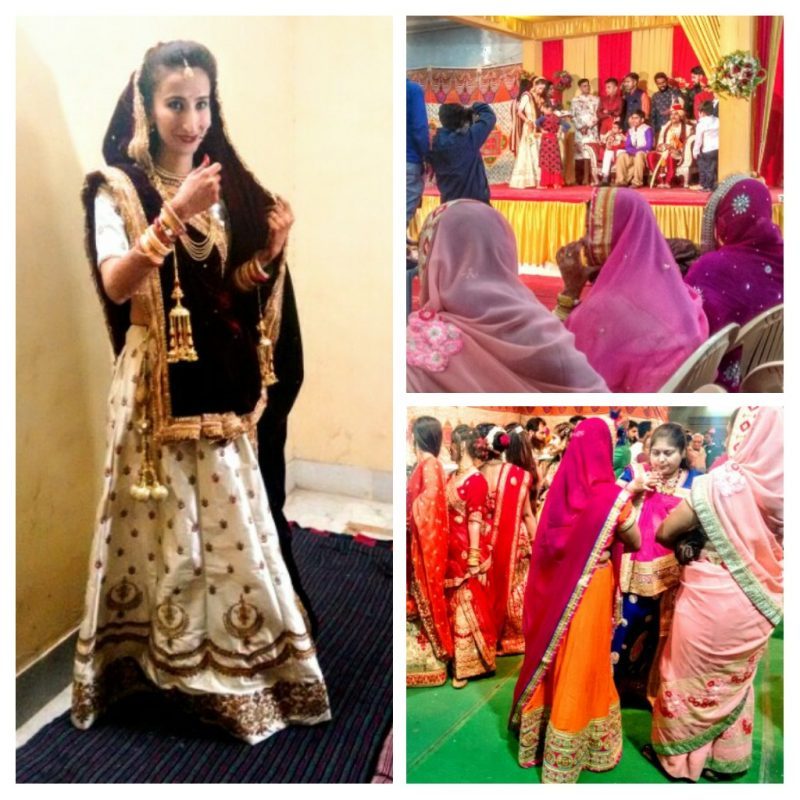 And it was a delightfully colourful evening – the whole marriage ceremony takes place over several days and nights and costs the bride’s family an absolute fortune. There were saris of every hue, mountains of delicious food being cooked and consumed (the bride’s family aren’t allowed to eat though) and a cocophany of drums and firecrackers when the groom finally arrived at midnight. He strode moodily to the stage at the front of the main room at the ashram and sat on a sofa.

The bride, who was hidden in a back room for most of the evening then walked to the stage under a kind of awning. The groom appeared to ignore her completely for a good long while. I left the party at that point.

I saw the bride’s brother a couple of days later. He said his whole family were exhausted after the extensive marriage ceremony – the final part of which lasted through the night. They were also grieving the loss of the their sister / daughter / niece from the household but grateful that at least she still lived in Jaisalmer. He added that he had already started saving up for the eventual wedding of his eight year old daughter.

Jaisalmer has a frontier town feel – it’s close to the border with Pakistan and there were several days when there were fighter jets roaring overhead (Indian government posturing I was  told). It’s certainly the most ‘male’ place I have stayed in so far. There were a few women with jewelry and vegetable stalls in the market and a few women street cleaners but their presence was mainly domestic and behind closed doors.

There were no female staff at the hostel and while I was mostly treated with kindness and respect there were times when I had to robustly defend my boundaries around personal space. I did it with as much patience and good humour as I could muster.

There is definitely an advantage to sticking around in one place for a bit longer than is usual on the backpacker trail. Taking time to talk with local people and other travelers creates deeper connections and insights.

I met a splendid fellow from Spain who went to the wedding with me, then the following evening I joined him for dinner at the home of a delightful local couple who have a shop. They were all so sweet and generous and the food was the best I’ve had in India. 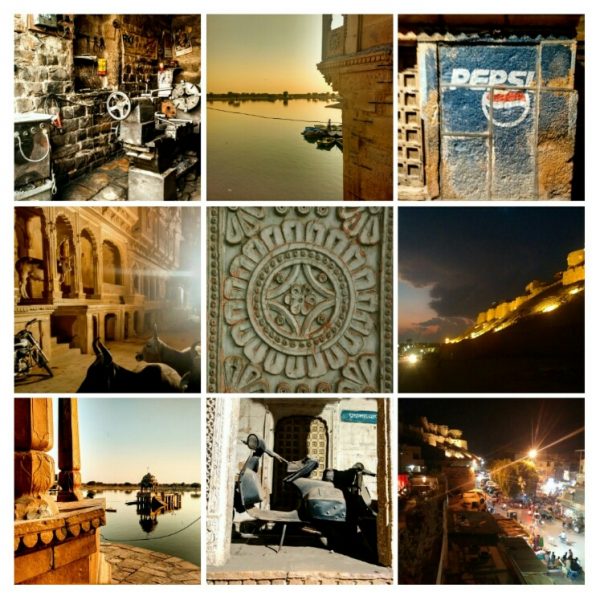 To add to the excitement there was an election for the legislative assembly of Rajasthan on the 7th of December. The election takes place every five years and this one was eagerly anticipated because the people were generally bitterly disappointed by the broken promises of Modi and the right wing BJP who won in 2013.

The BJP is India’s largest political party in terms of representation in the national parliament.

Campaigning for the centre left Congress party (INC) which is associated with the Gandhi family was enthusiastically underway while I was still in Bikaner and in Pushkar there were reminders to vote spray painted on the lakeside ghats.

It took four days for the votes to be counted and when Congress was declared the winner on the 11th of December there were fireworks, drumming, chanting and cheering well into the night. 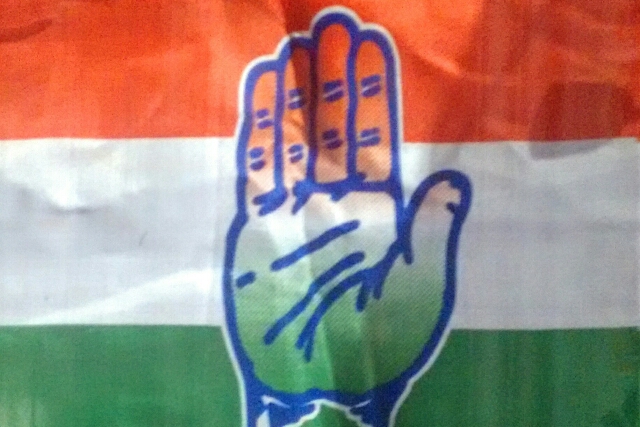 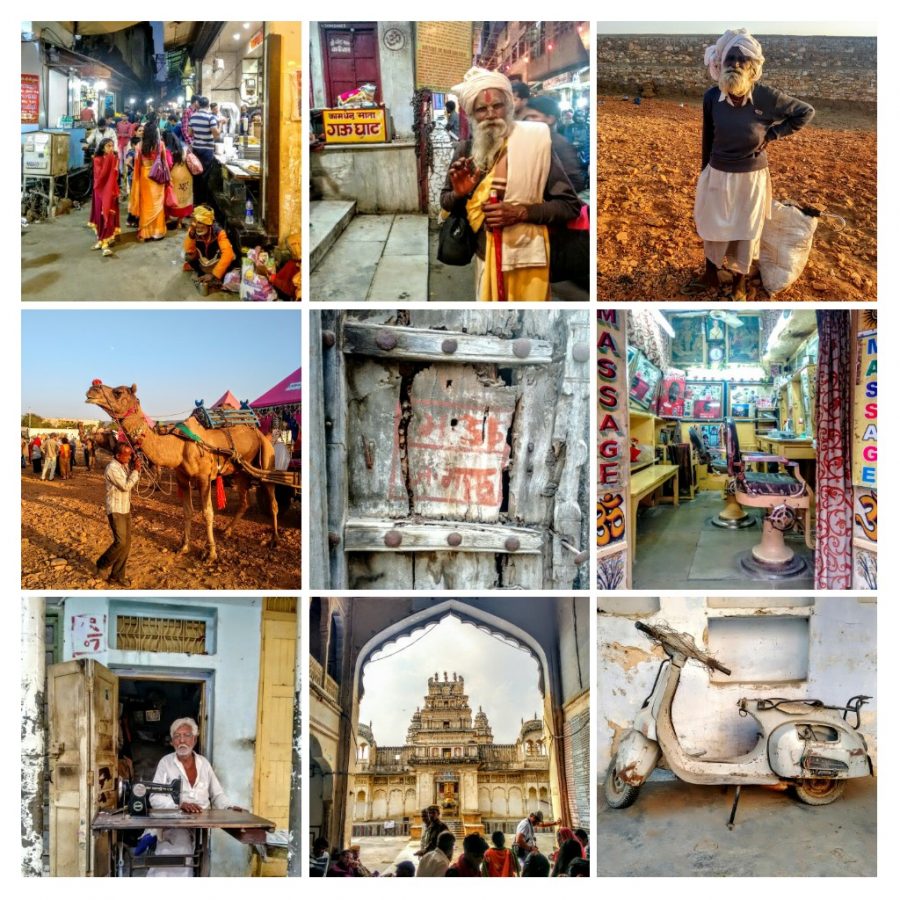 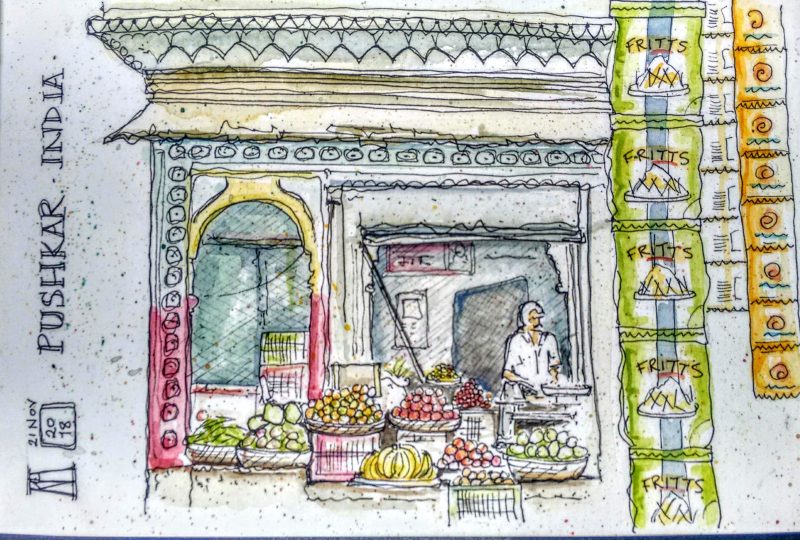 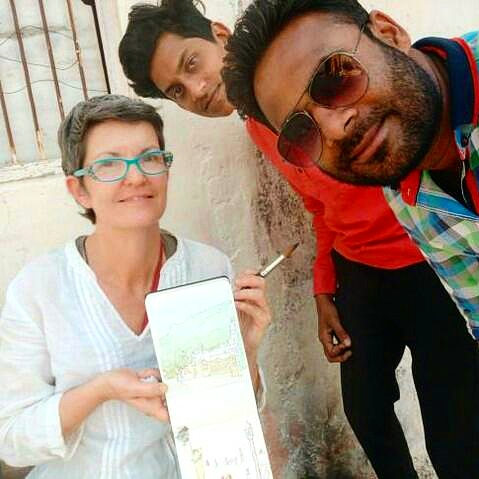 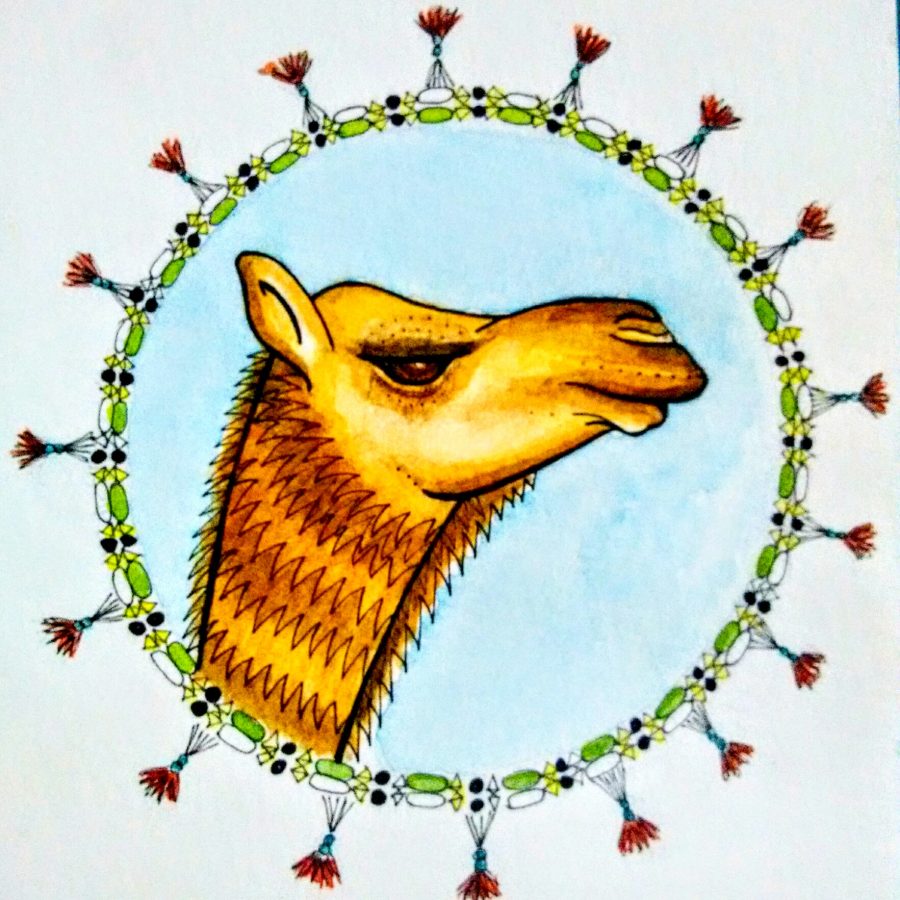 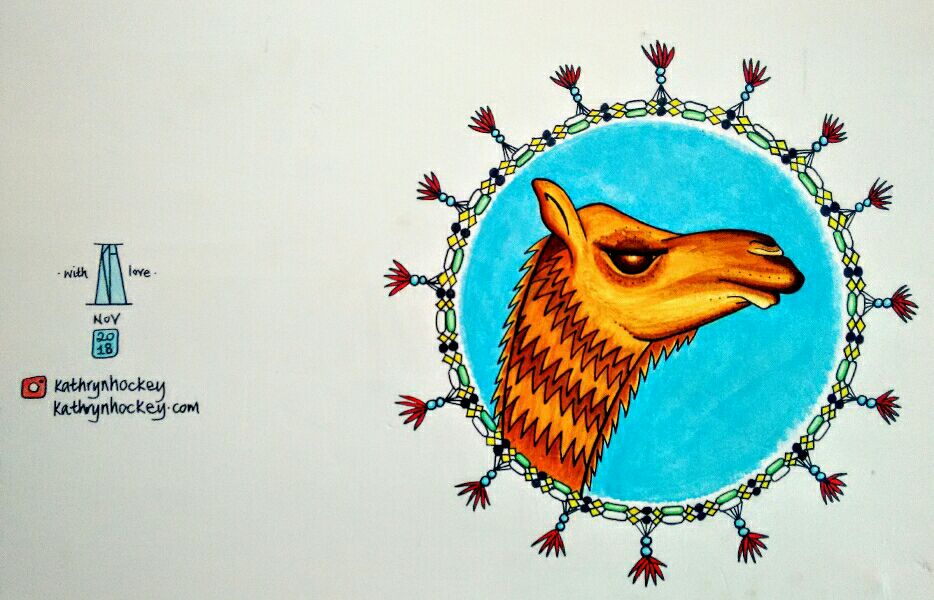 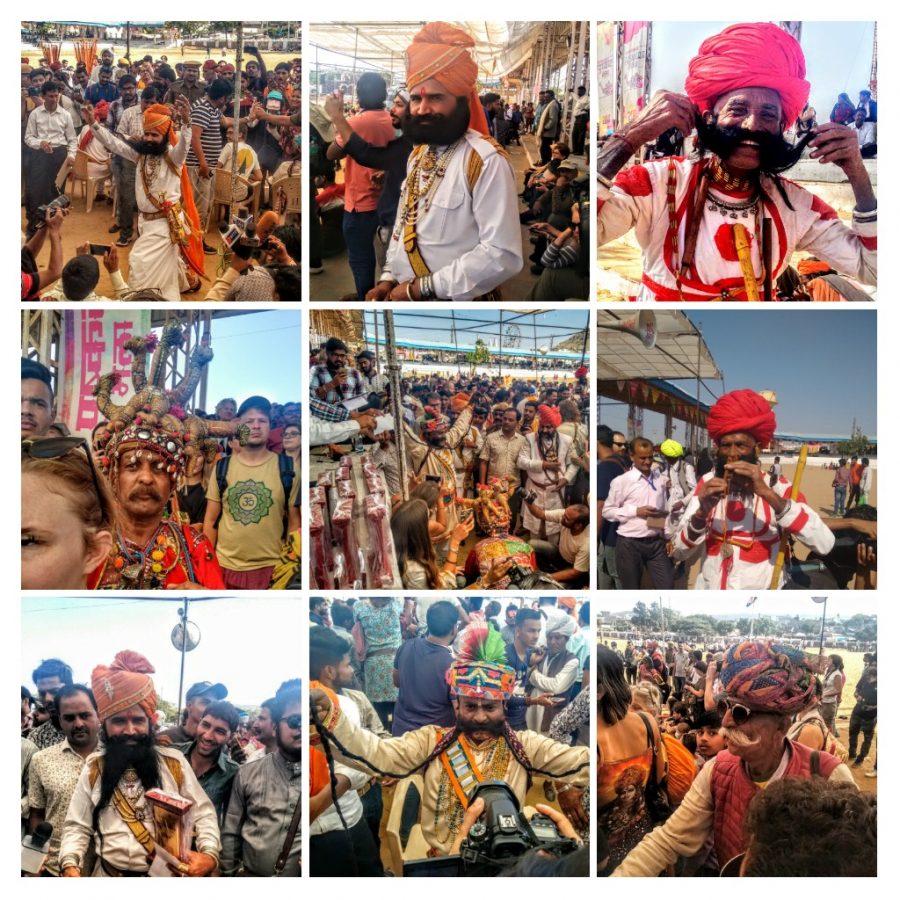