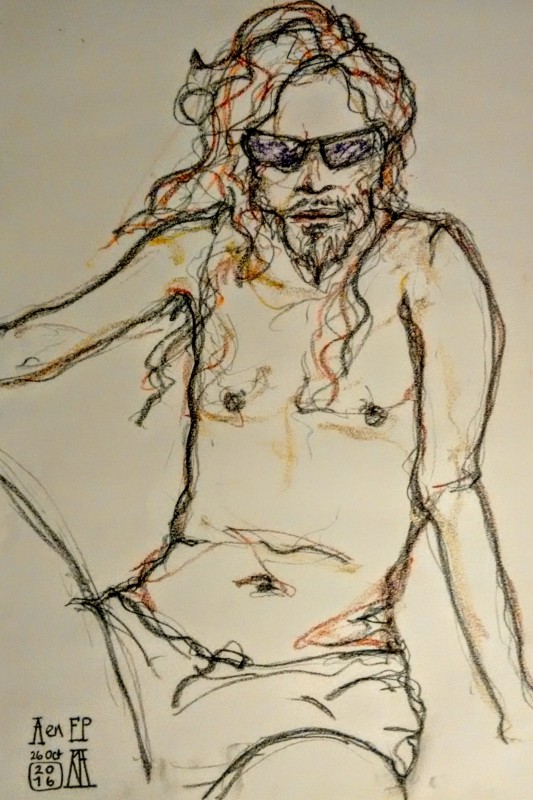 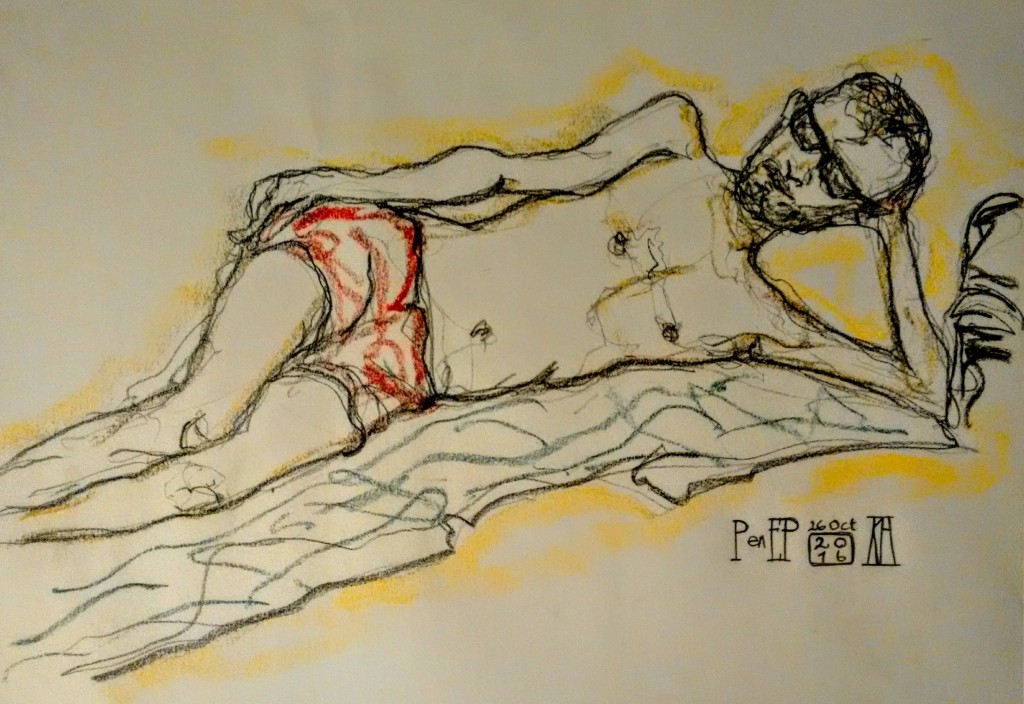 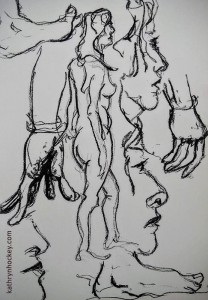 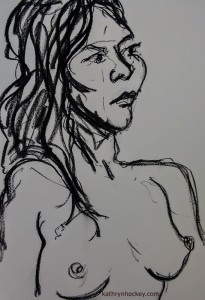 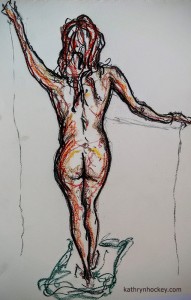 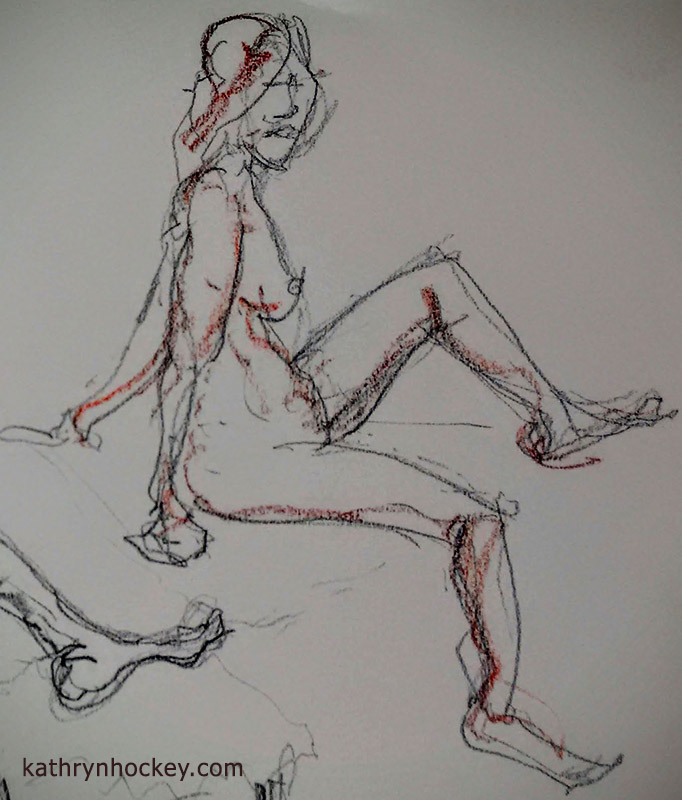 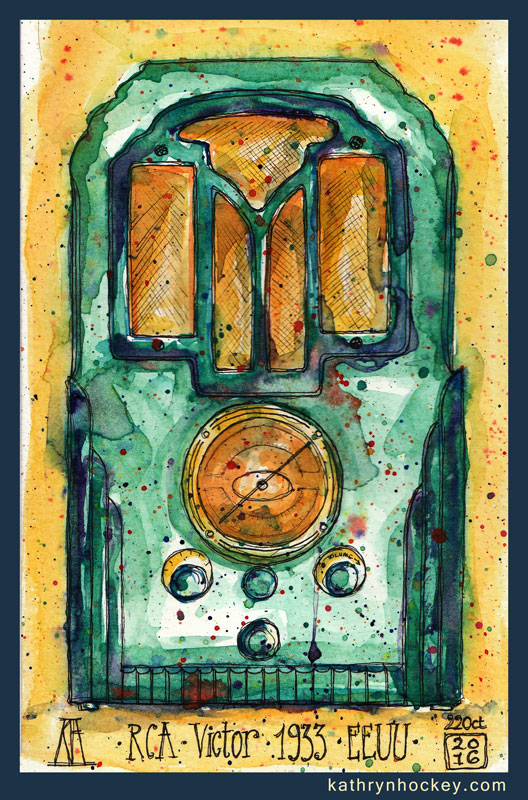 I am reliably informed by Señor Angel, Vejer’s proud and knowledgeable collector of antique radios, that this art deco style beauty was produced by RCA in the USA in 1933 and was modelled on the Empire State building.

Its name is Victor and  it’s brown in real life.

I was laughing to myself while I was painting as Angel was twisting the tuning knob of an old set and creating that glorious whiny crackle that one hears so rarely these days…joy! 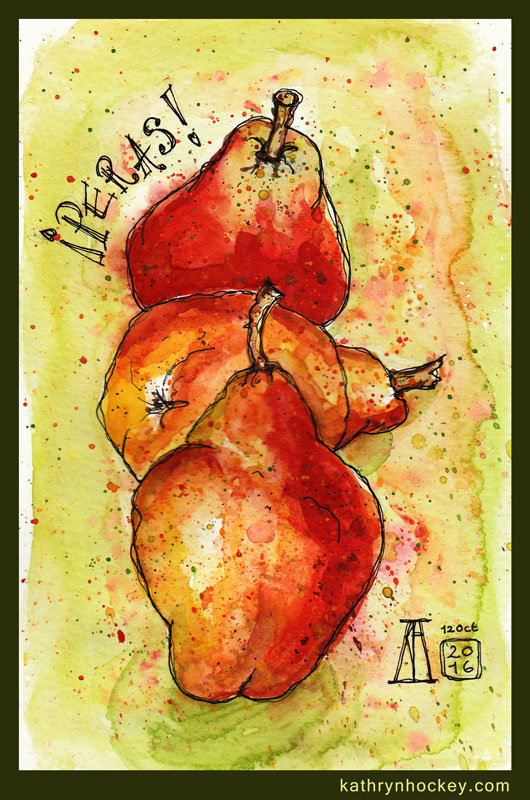 These gorgeous pears are splendid with autumnal colours which lend themselves beautifully to be rendered in watercolour. They’re also bound to be delicious!

To mark the occasion we are giving away ‘The Black Dawg – an illustrated poem about Depression and Hope’ in its eBook format!

The offer will run until the end of October 2016 – all you need to do is click here to get in contact and we’ll email you the eBook.

Please feel free to share this offer widely and if you like the book it would be wonderful if you could please give us a positive review on Goodreads, Amazon.co.uk, Amazon.com, Amazon.es and / or anywhere else you fancy.

1. Talk about your feelings

5. Keep in touch with loved ones

8. Do something you’re good at

9. Accept who you are

…and have found that cultivating mindfulness and taking regular exercise are particularly helpful for improving my emotional well-being.

Making the illustrations for The Black Dawg book also helped me enormously – I am much more adept at recognising and dismantling the process which starts as a single negative thought before it suddenly swells into an overwhelming landslide of undermining and vitriolic self-loathing mind-babble with accompanying anxiety and exhaustion as my psyche does battle with itself.

Eckhart Tolle’s theory about the ‘pain body’ really rings true for me; seeing the negativity as a separate entity gives me more strength to keep it in check and overcome its insidious effects in the moment it arises.

‘Coming out’ as depressive has also been liberating and strangely uplifting in that it’s enabling me to form stronger and more open connections with my friends and family and even with people I don’t know. As Brené Brown says in her funny and brilliant TED talk ‘The Power of Vulnerability’ – “connection gives meaning and purpose to our lives; it’s why we’re here.”

And we are all in this together…

Louis, who wrote The Black Dawg poem, and I strongly believe that The Black Dawg book can help people suffering from depression feel less isolated. We also hope that it will help friends and family to better understand how it feels to be depressed. And that’s why we want to share it – we think it’s a valuable resource in the armoury against mental illness.

This evening the Chicken & Frog bookshop in Brentwood, Essex are holding an auction in aid of The Young People’s Counselling Service and we’re delighted that The Black Dawg book and some signed prints of the ‘Spiralling Branches’ illustration from the book will be included.

Dr Carole Easton, chief executive of The Young Women’s Trust explains why it’s so important to build resilience in children and to prevent mental issues becoming mental illnesses in this Huffpost article ‘Young People’s Mental Health – We Must Do More‘

Take excellent care of yourself! 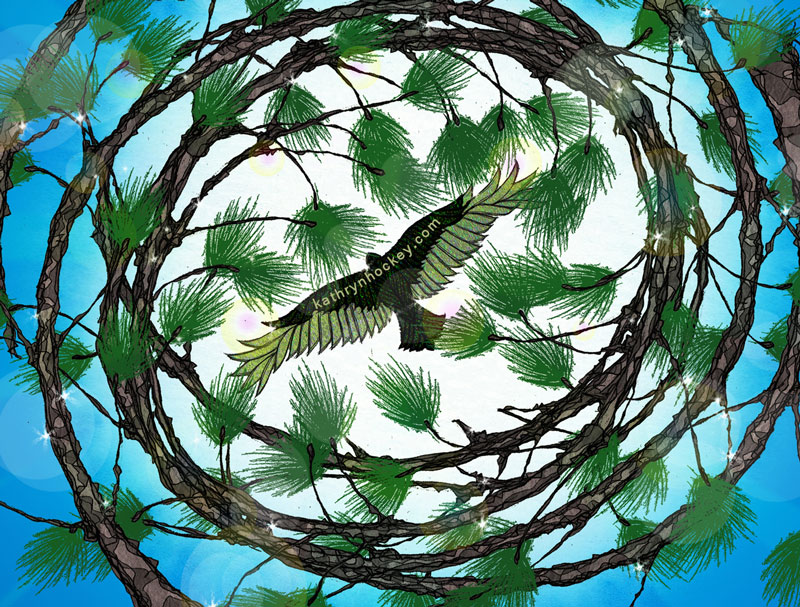 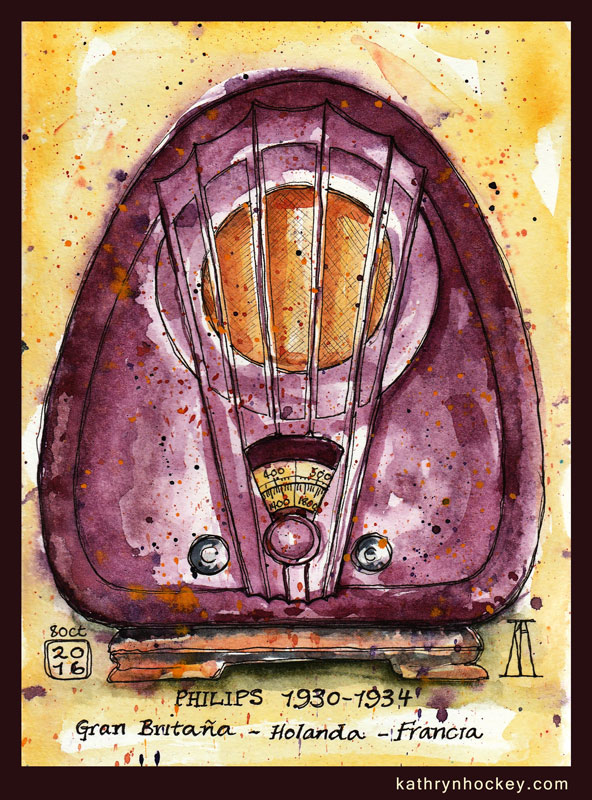 Continuing the retro radio theme for my sketch session this morning I returned to the radio shop / museum and chose a Philips model which was manufactured in Great Britain, Holland and France between 1930 and 1934.

Needless to say I took liberties with the colours…the actual radio was made out of Bakelite, the world’s first completely synthetic plastic, which was invented in 1907 by Leo Baekeland and is actually brown with reddish hues. I felt purple was a more interesting option so I used my artistic license. 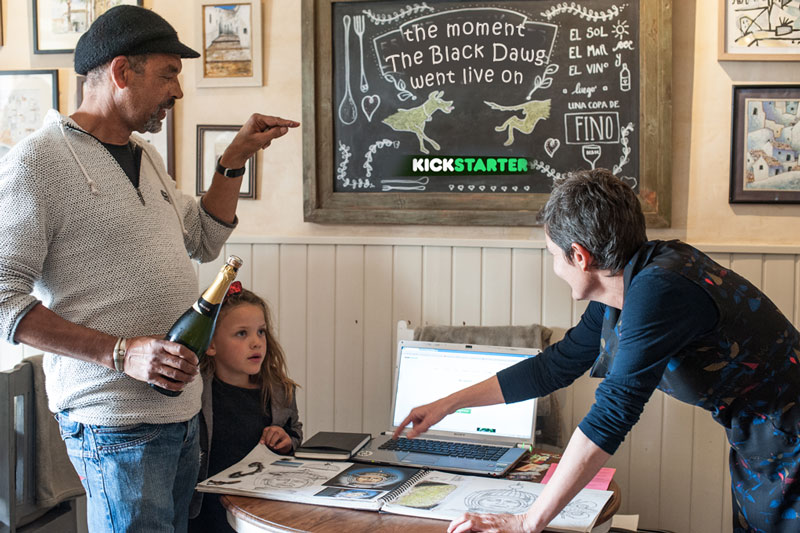 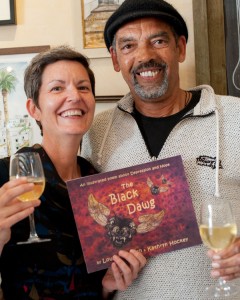 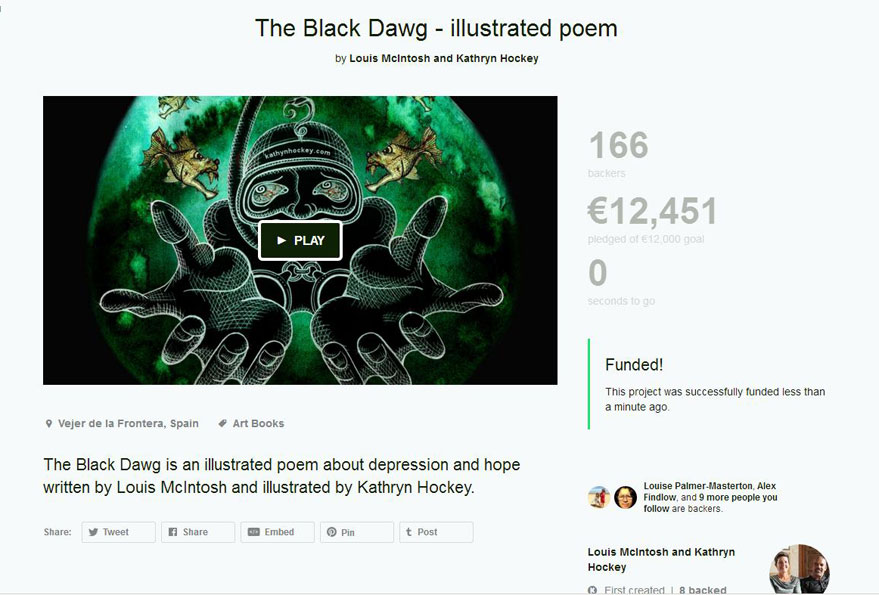 The Black Dawg book really is a beautiful thing! 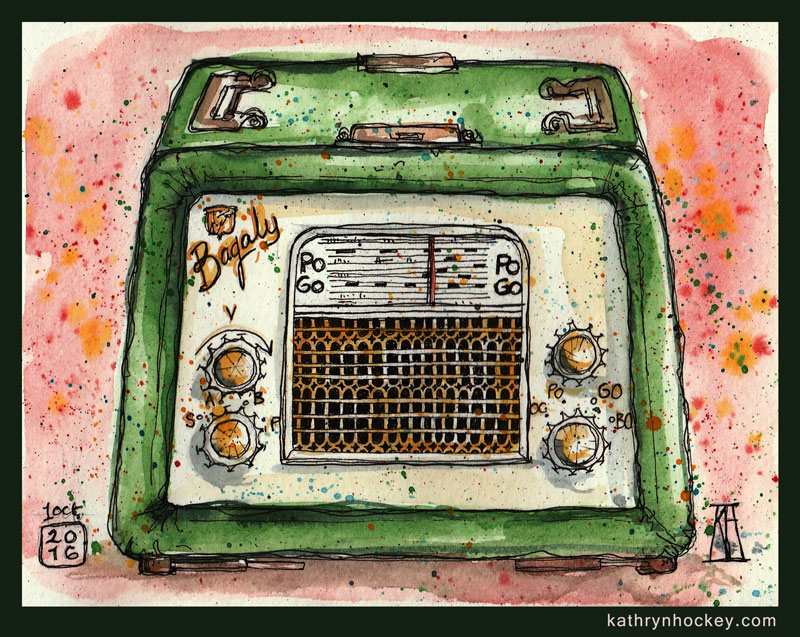 There’s a gorgeously eccentric shop in town which sells assorted hardware and houses an impressive and beautiful collection of old radios.

The owner plays classical music which spills out onto the street, inviting passers by to enter (worked on me).

I spent a very happy hour in there yesterday sketching this French example and intend to go back again, and again and again…