I found these gorgeous mushrooms at the Puntarelle & Co fruit and veg market which opens each Saturday morning in the railway arches of Spa Road. That’s approximately three minutes walk from my flat.

I was shopping for a vegan brunch that I’m hosting on Sunday. I’m planning to cook the mushrooms with olive oil, garlic and black pepper and serve them with avocado and homemade humus on sourdough bread.

I bought the sourdough bread from the Little Bread Peddlar, another arch-dwelling local business, on the other side of Spa Road to the veg market. Amazing to think that when I first moved in here 30 years ago there was only a sparsely stocked Spa mini-market, a chip shop and a dodgy pub. Now we’re spoilt with all manner of artisan goodies.

Just as well they only open on Saturdays though or I’d spend a blinking fortune! 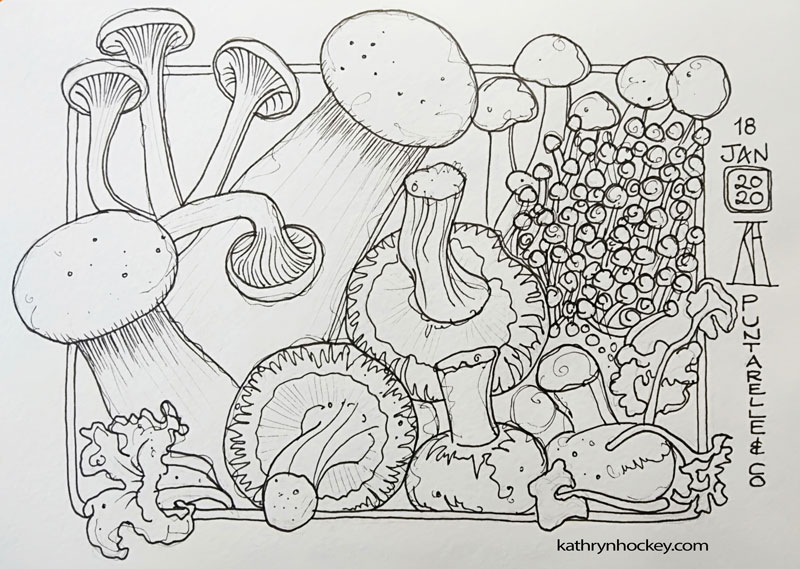 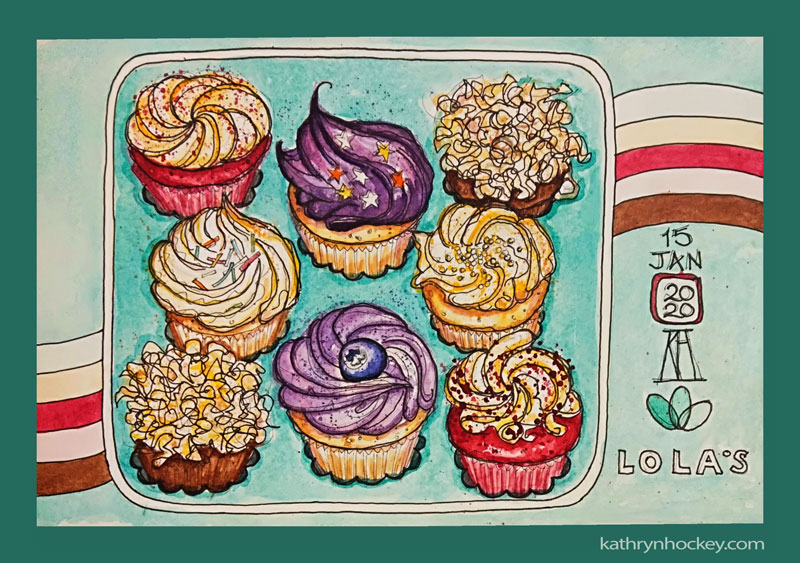 I picked up these gorgeous mini cupcakes from the Lola’s cart in London Bridge Station last night. The cupcakes would otherwise have been chucked out at the end of business.

I was delighted to rescue them at the bargain price of four quid via the food waste fighting app Too Good To Go.

I spent a few happy hours sketching them today…I did eat a couple as I worked, just to check that they were still fresh, and yes, they were delicious. I’m saving the rest of them to share with my flatmates for this evening’s dessert, which shows great restraint on my part.

These mini cupcakes are pretty, cheap and exceptionally tasty – a perfect “paint it then eat it” project!

Thank you Lola and Too Good To Go! 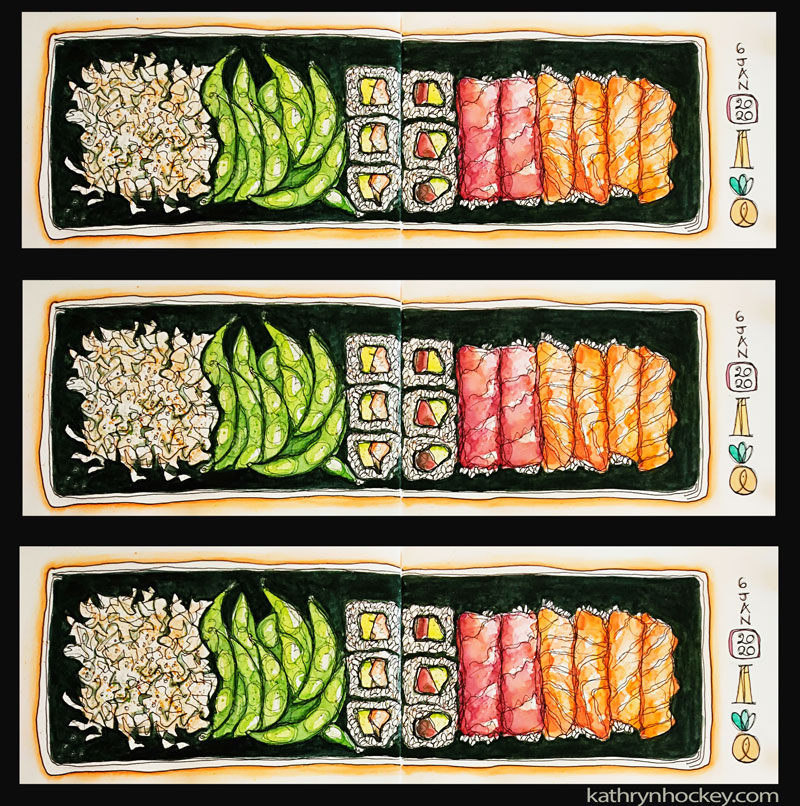 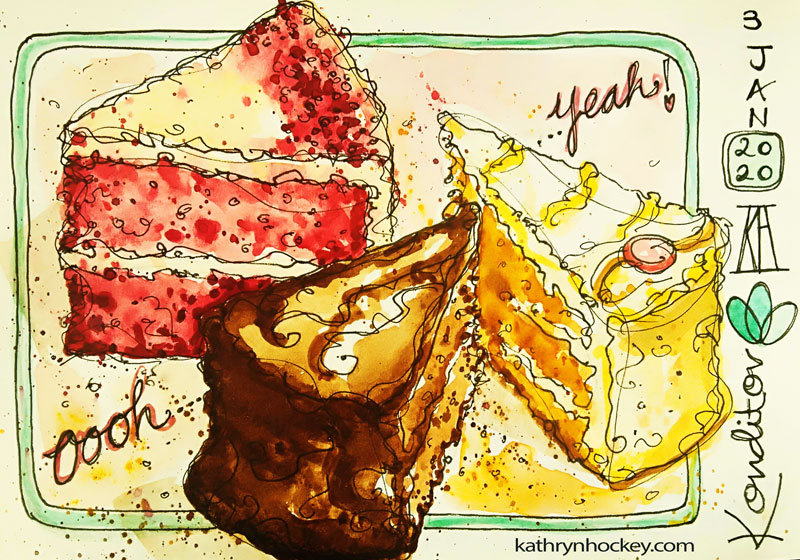 I picked up this delightful trio of chubby cake wedges from the Konditor bakery near Borough Market. For a measly three quid! All courtesy of the brilliant anti-food waste app Too Good To Go.

Too Good To Go lets you locate and pay for delicious bargains at your favourite local food outlets, food which would otherwise be thrown away at closing time.

There’s a degree of mystery involved since you’re never actually sure what you’ll get in your ‘magic bag’ when you pitch up to collect your goodies. But if you choose outlets with good reputations and many starred reviews you’ll not be disappointed.

I promised myself an evening of cake indulgence if I painted my edibles when I got them home. A carrot (cake) over stick approach to motivation in these first few confusing days of the new decade, when the atmosphere is sticky with new resolutions jostling in the fug of festive overindulgence.

I love making pen and wash sketches of food. I find that looking forward to eating it when the job’s done helps me focus – I work fast and, hopefully, loose!

I did share the cake with my flatmates and will definitely be using Too Good To Go again soon. Very soon. 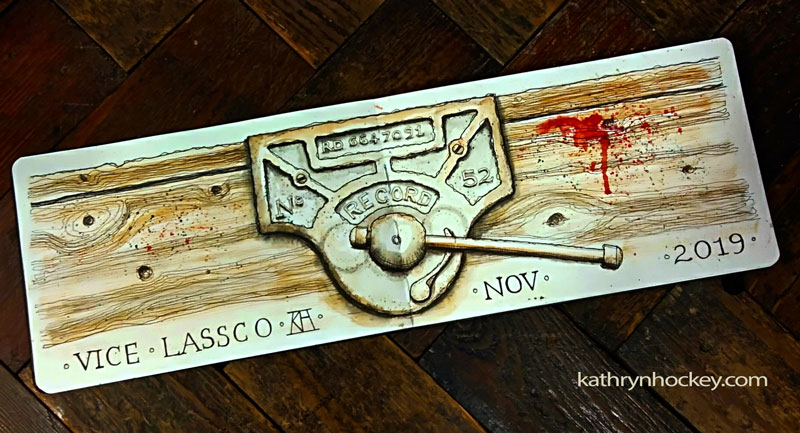 Lovely to meet up with another artist friend on Saturday and do some drawing in the Lassco warehouse of reclaimed treasures in Rope Walk, Bermondsey.

The friendly Lassco team made us really welcome, there were chairs and a table for us to work at and a huge number of beautiful and quirky old things to draw.

I chose this vice…it did actually have red paint splattered on it but my interpretation looks quite sinisterly bloody, which I like. As the Lassco manager said ‘this one tells a story’!

We’ll definitely be returning there to draw again. 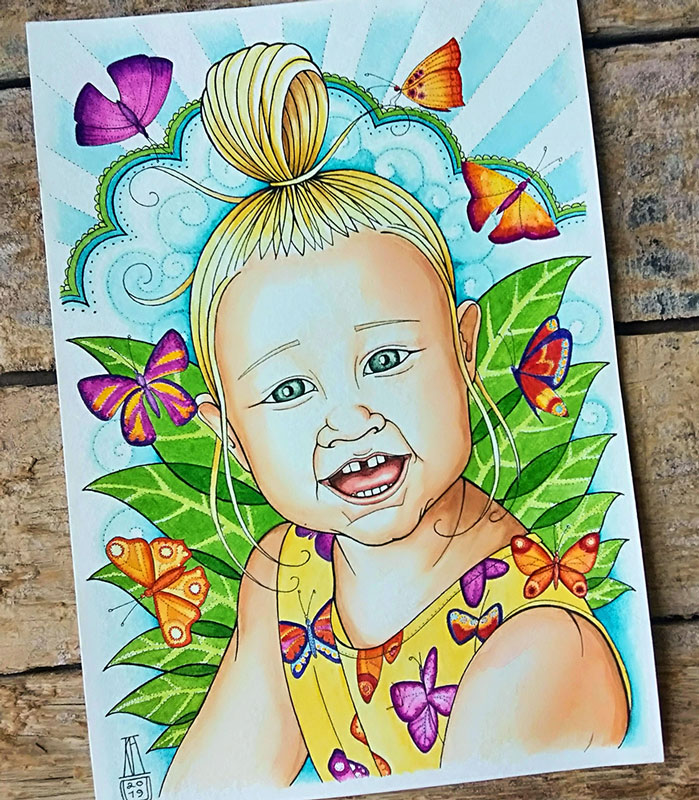 I made a few portraits of a Dutch friend of mine over the past few months and when I met his family his nephew asked if I’d make a portrait of his daughter Haylen in a similar style.

Haylen’s a really animated and sweet little girl who laughs a lot and has fantastic teeth; we were all keen that she should show them off in the portrait. Her mum and dad sent me a few recent photos (none with the teeth, however) and one of her laughing when she was two.

I drew the portrait as an amalgamation of several of the photos and checked with the family that I’d caught Haylen’s ‘essence’ once the linework (below) was finished.

Finally I painted Haylen with watercolours. 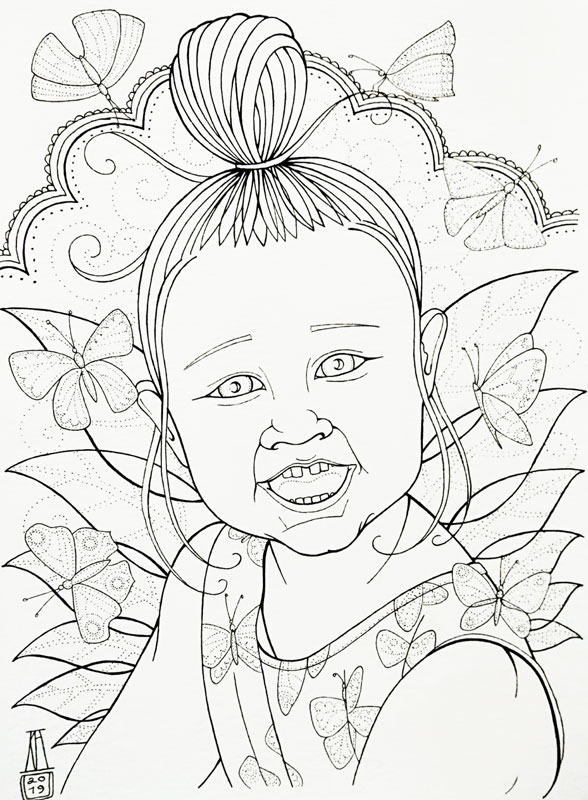 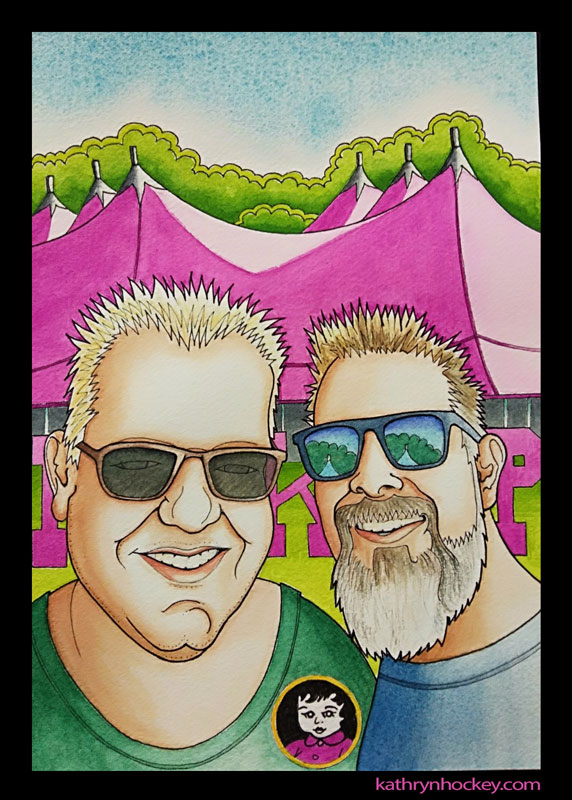 I was commissioned to make this double portrait while I was staying in Holland. I worked from a photo and made a linework likeness in pencil, drew over it in waterproof pen and then coloured it in with watercolour paints.

This was a time consuming lesson in getting the brief clear from the get go.

Initially I understood that Mike only wanted a portrait of his buddy, not a double portrait and I went ahead and finished it (below) without double checking. We were both disappointed at the mix up but very happy with the final outcome.

I was staying at Camping Schoonenberg, a beautiful campgound set in woodland in North Holland when one of the staff members saw me painting a portrait. He showed a photo of my painting to the manager who asked me to make a new combined sign and map for the campground. Delighted! 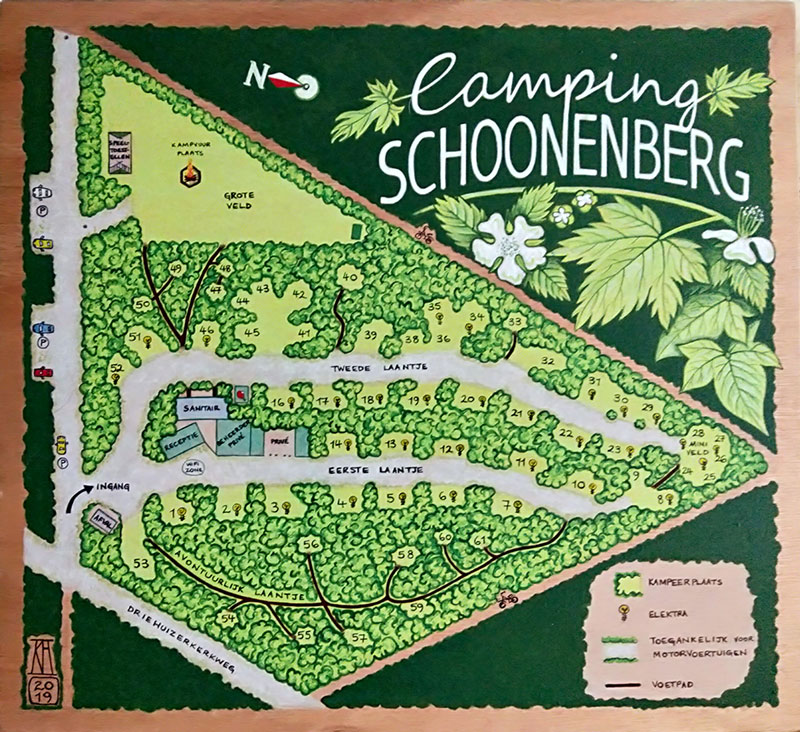 I started by making a rough map of the campground as I walked around it, using an aerial view from google earth as a template for the outline. The manager then helped me number the camping places and mark which ones had electricity. 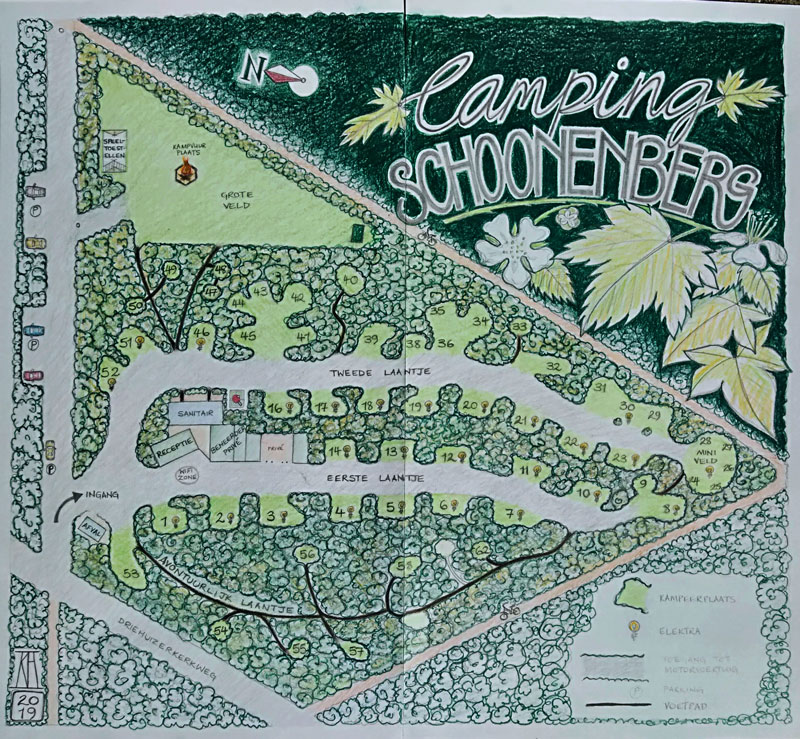 I then drew the full size map out on paper and added all the details and text (above). 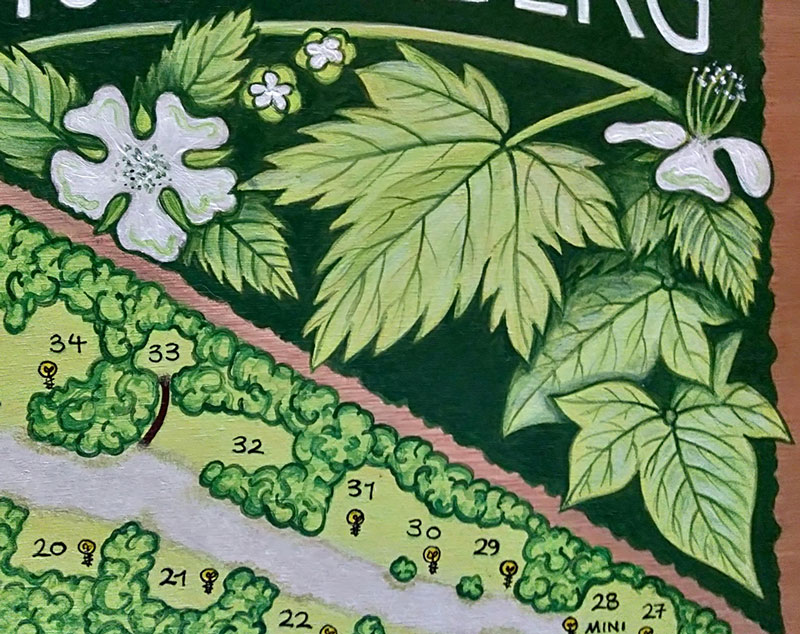 Once the draft had been approved I traced it onto a piece of primed marine plywood which had been cut to allow a narrow unpainted border. 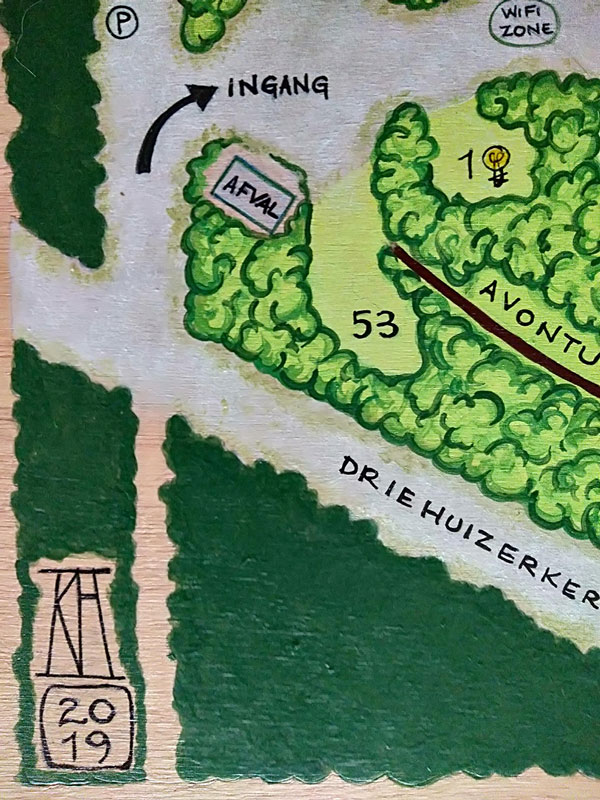 Since the sign will be hung in a place which is sheltered from direct sunlight and rain and will be stored inside during the winter months when the campground is closed I chose to use acrylic paints which are water based. That makes the whole process much cleaner and odour free. 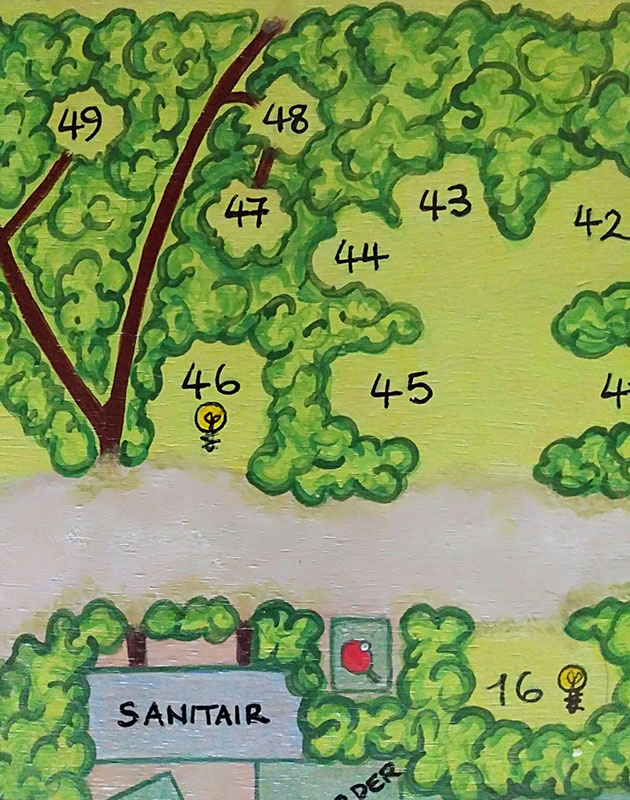 A quick sketch of IJmuiden Port from Forteiland. 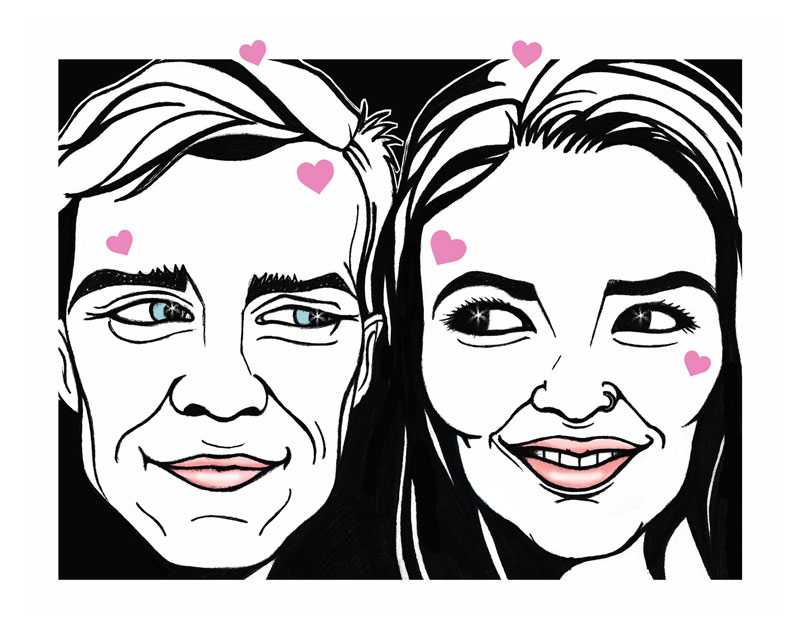 I went to the beautiful wedding of this  delightful couple recently. It was a gorgeous day – really fun and moving.

This is the card I made them, adapted from photos I found on their Instagram feed.

I drew the portrait in pencil, scanned it into Photoshop where I tinkered with it, then printed it onto card.

Wishing them all the love and luck in the world for a long and happy marriage.