Even if I can’t get to Burnham Art Club meetings on a Tuesday morning, to either paint out in the open air or inside the Art Club meeting hall, I set time aside to make a new painting at home.

These are the paintings I made in November. 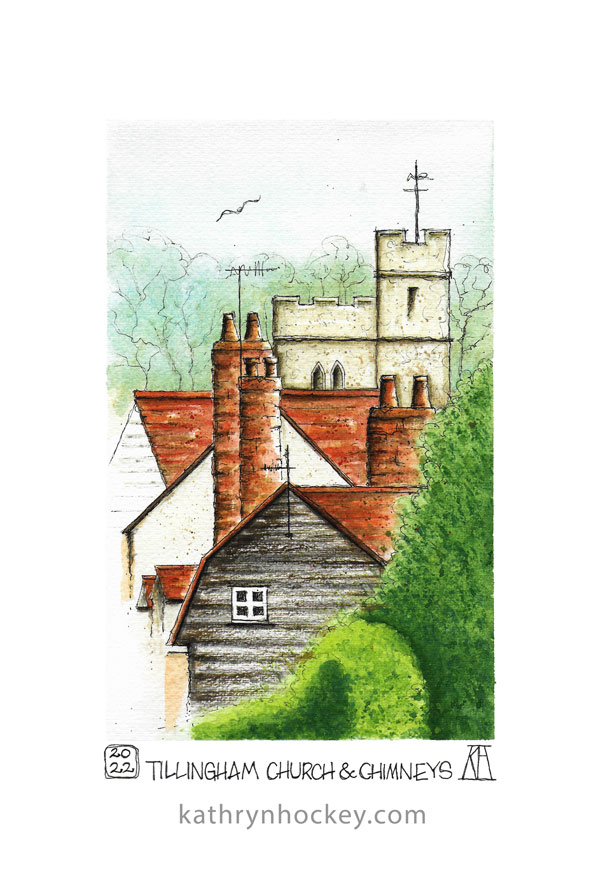 I actually made a version of this view of Tillingham Church about six months ago in May. I drove to Tillingham on a bright morning and sat drawing in the street until the chill from the wind got a bit uncomfortable. The passersby were mostly curious and friendly and the guy whose house I was sitting outside kindly offered me a cuppa. He’d overestimated the warmth of the sunshine too – he came out wearing shorts and no top!

I was out of practice back then and although the painting  came out ok, I wasn’t happy with the composition so I redid it this month. 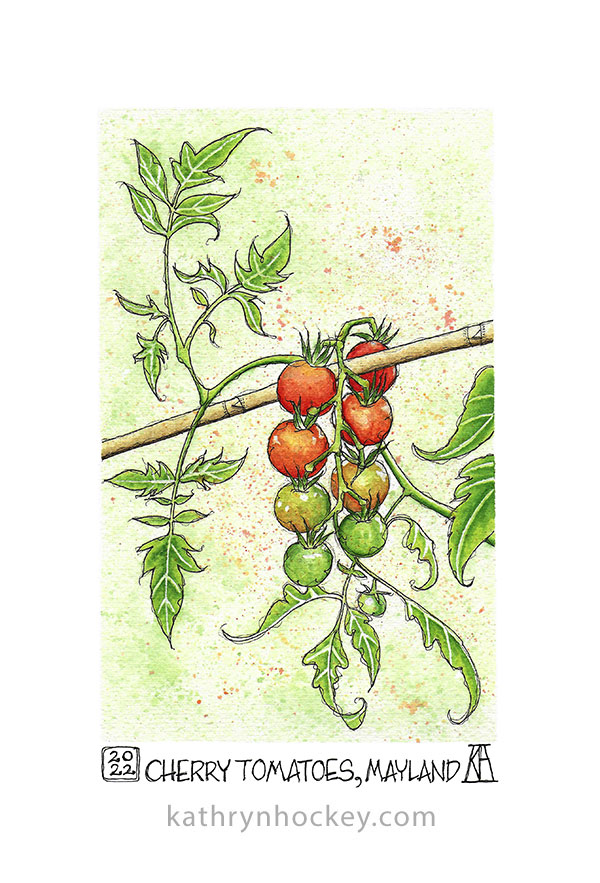 We’ve still got tomatoes growing in our greenhouse here in Mayland. I was struck by the elegance of this particular branch as it draped over the bamboo cane. I also love the colour gradation of the fruits as they ripen at differnet rates. 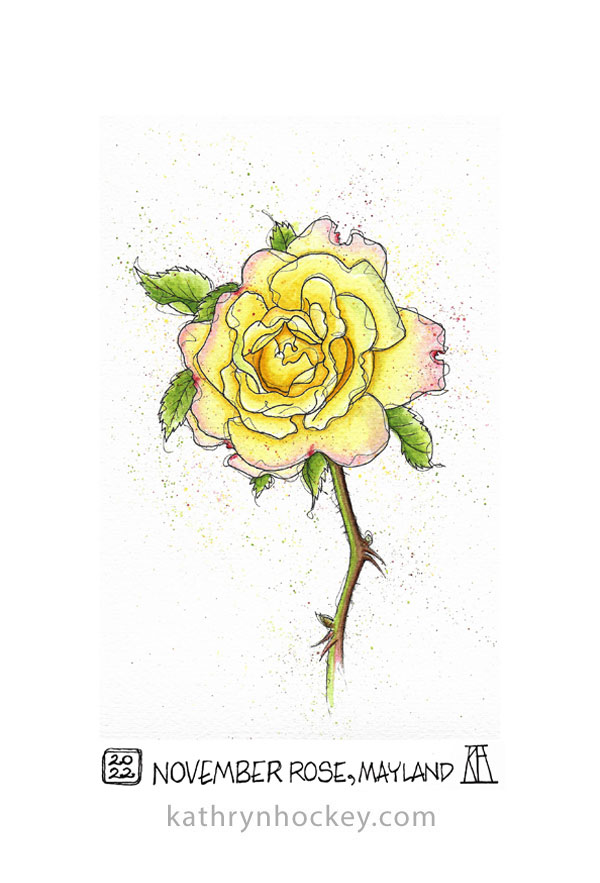 And finding this beautiful rose blooming in our neighbours’ garden while I was house  sitting recently was a lovely surprise. Its scent was diivine but, sadly, capturing that was beyond me! 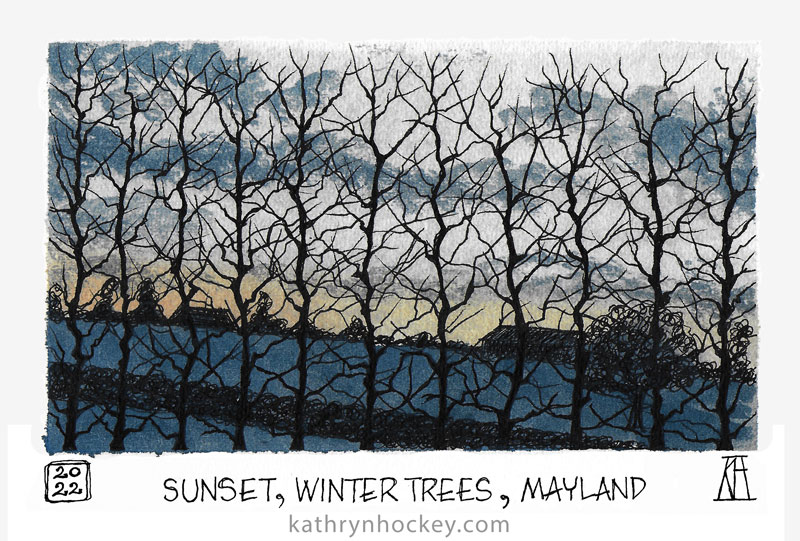 You may recognise the form of the trees above from a painting I made almost exactly a year ago.

It’s the view from my bedroom window, and by November the sun has crept around the house to set behind the neighbours’ poplars, with Mayland Hill in the background.

Although the silhouette of the trees is basically unchanged, there’s huge variation and sometimes drama in the sky colours as the sun goes down.

Back in September I joined Burnham Art Club – a group of painters formed in the 1960s based in the beautiful riverside town of Burnham-on-Crouch in Essex.

It’s been a joy to meet other like-minded painters for the weekly discipline of painting in the open air, especially since the weather this autumn has been (mostly) glorious.

Apart from the Autumn Acer, I started all the paintings shown below on site, adding the finishing touches in the comfort of home. They’re all pen and watercolour on 30.5 x 23 cm 300gsm 50% cotton Fabriano paper which has a lovely ‘woven’ texture. 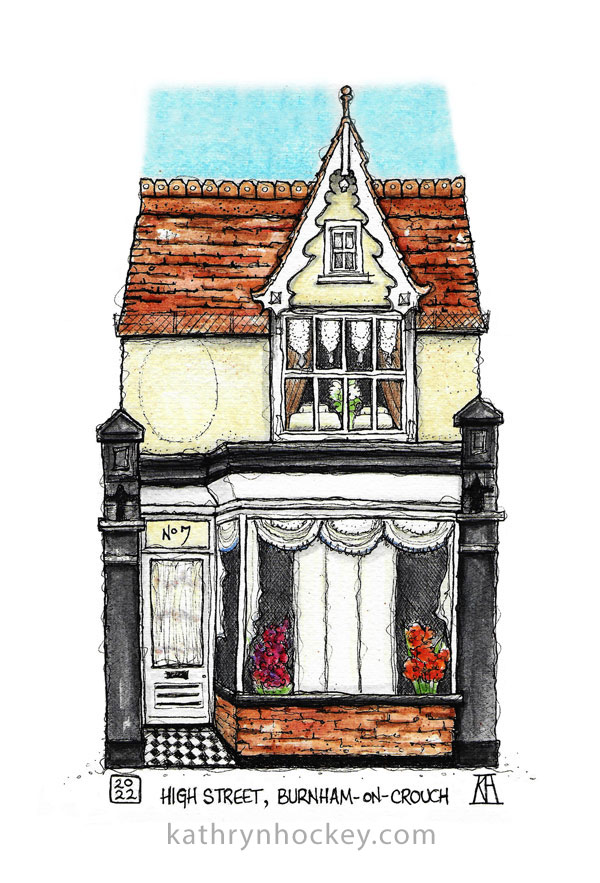 I was invited in for coffee and a little house tour by the lovely owners of this gorgeous 250 year old Dutch built property, which they used to run as a combined antique and tea shop. 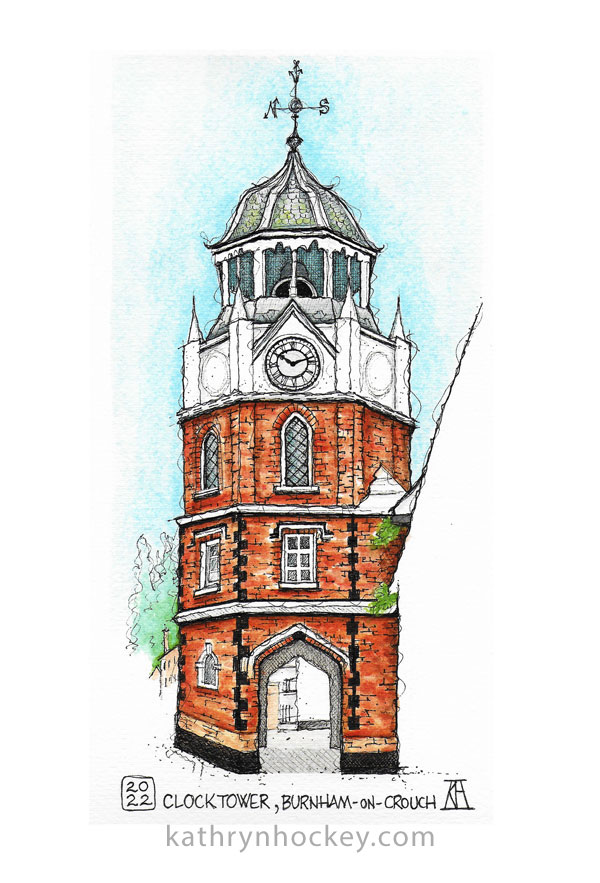 This stunning clock tower, which is the focal point of Burnham High Street, was built in 1877 in memory of Laban Sweeting, a local oyster merchant and philanthropist. The original plan was to put up a clock in his honour but donations came in so fast after his death that there was enough money to build a tower to house the clock.

I got the bones of this drawing down while perched on my little stool in the High Street, but once the cold rain showers joined the chilly wind I retreated inside to add the watercolour. 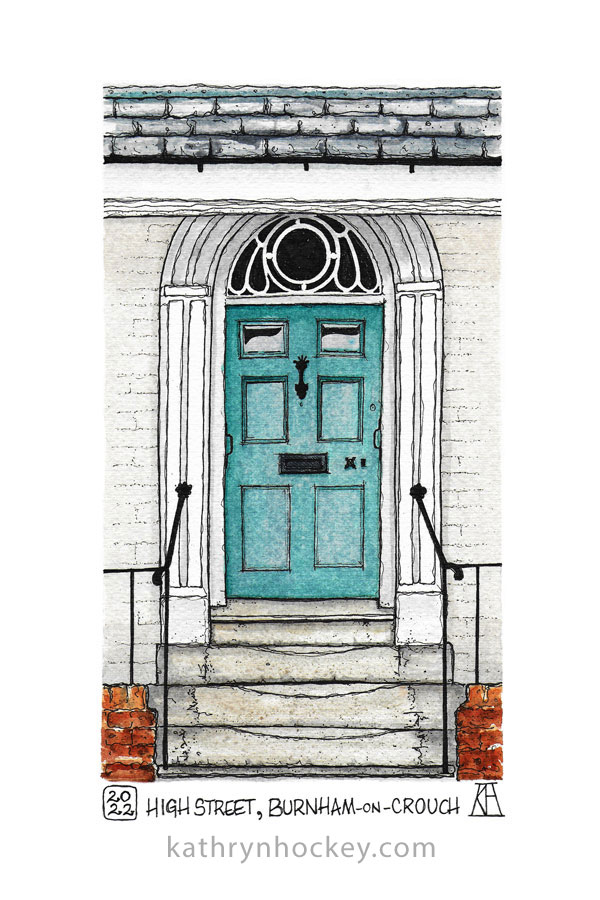 After tackling the clock tower with all its bricks and angles I was in the mood for a simpler subject the following week. I was drawn to the beautiful colour of this front door and the calming symmetry of its setting. 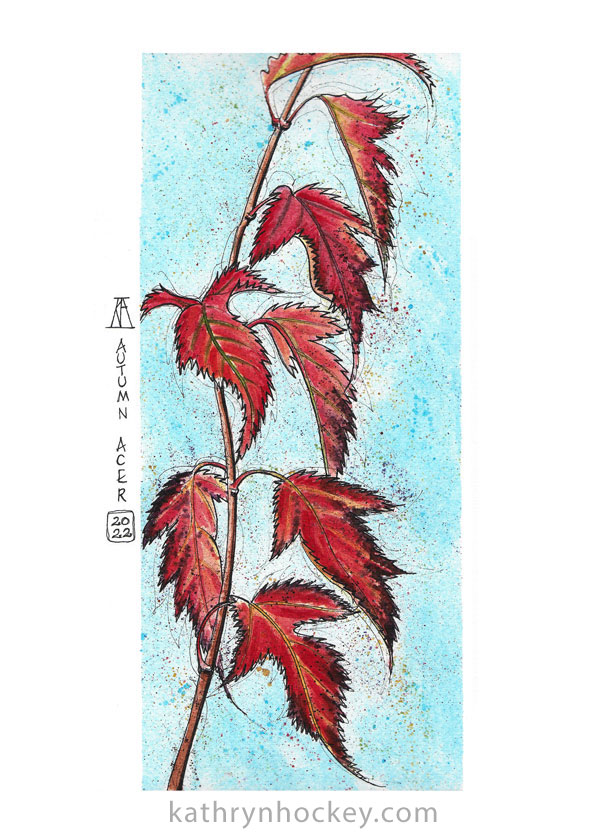 At the suggestion of the art club chair person we took a break from street painting and took on autumnal still lifes in the meeting hall. I plucked this acer branch from our garden as I passed because I was struck by the lovely contrast of its reddish leaves against the sky. Hence the blue background. 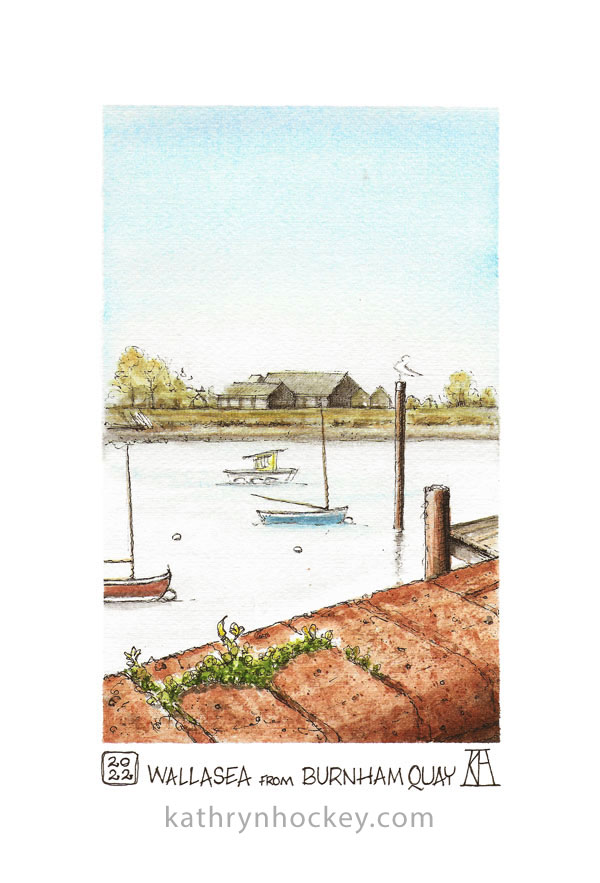 For week five, I decided that it was time to tackle some boats. I settled on this view across the River Crouch to Wallasea Island, home to a wetland bird sanctuary, from Burnham Quay. That obliging seagull kindly stood on the post for long enough to have its picture ‘taken’. 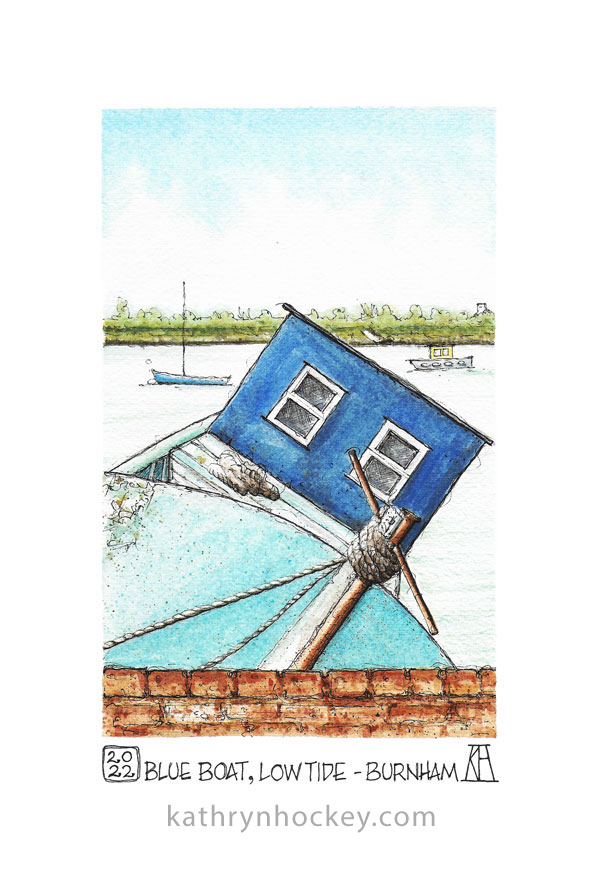 I loved the dramatic angle that this blue boat made with the horizontals as it leaned over at low tide. The River Crouch is an estuary, so tides flow in from and out to the North Sea twice a day. Of course the tide came in as I was painting, the blue boat started to float on the water, and all those angles changed. The people who came up for a look and a chat were a bit confused by the difference between my painting and the actual view! 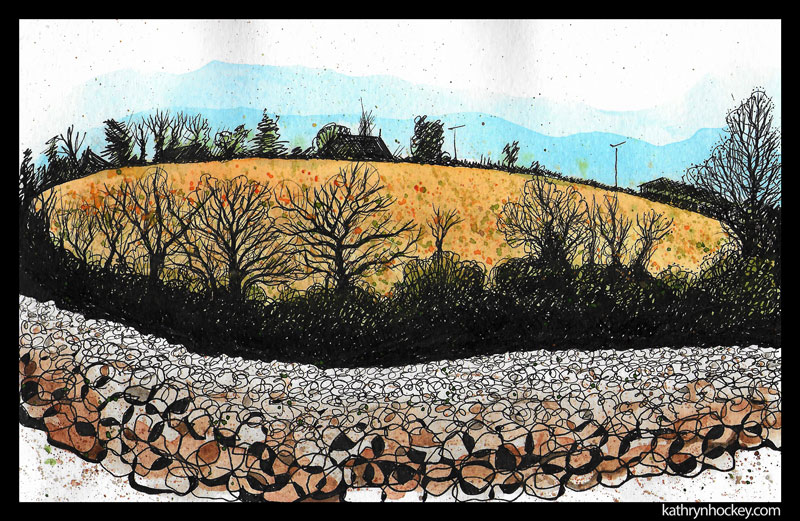 On my way back from morning dog walks, these winter tree silhouettes kept catching my eye. They are particularly beautiful in contrast with the orange field in the background. 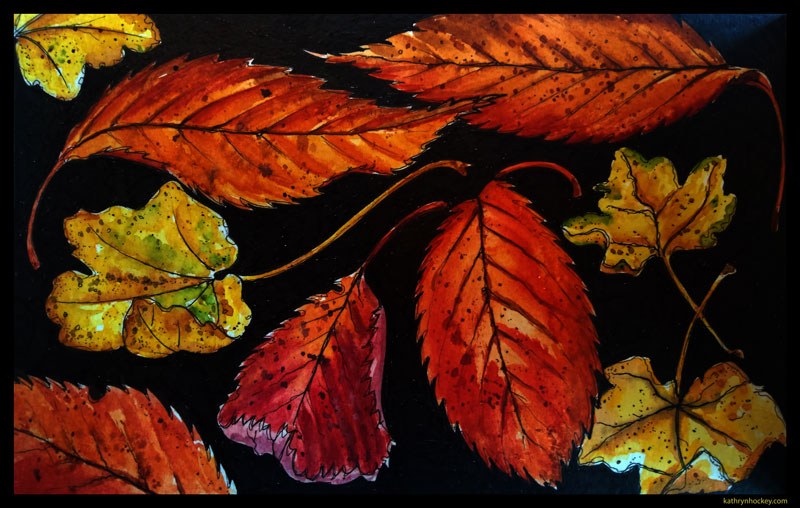 I was out walking one day and these beautiful fallen leaves seemed just too wonderful to leave behind. I wanted to paint the background black as a contrast to the bright leaves. 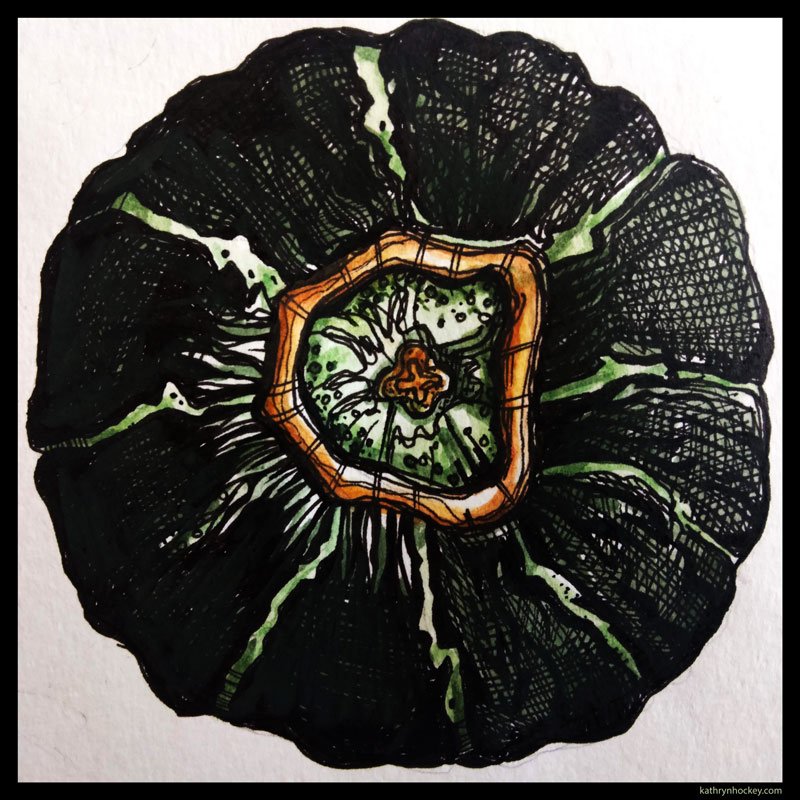 Here’s a pen and wash study of a little squash I grew in the summer this year, I love that deep, dark green and the lighter verdigris veins that demarkate the segments.

I added a digital background to the version below as I thought the orange would contrast well with the green. 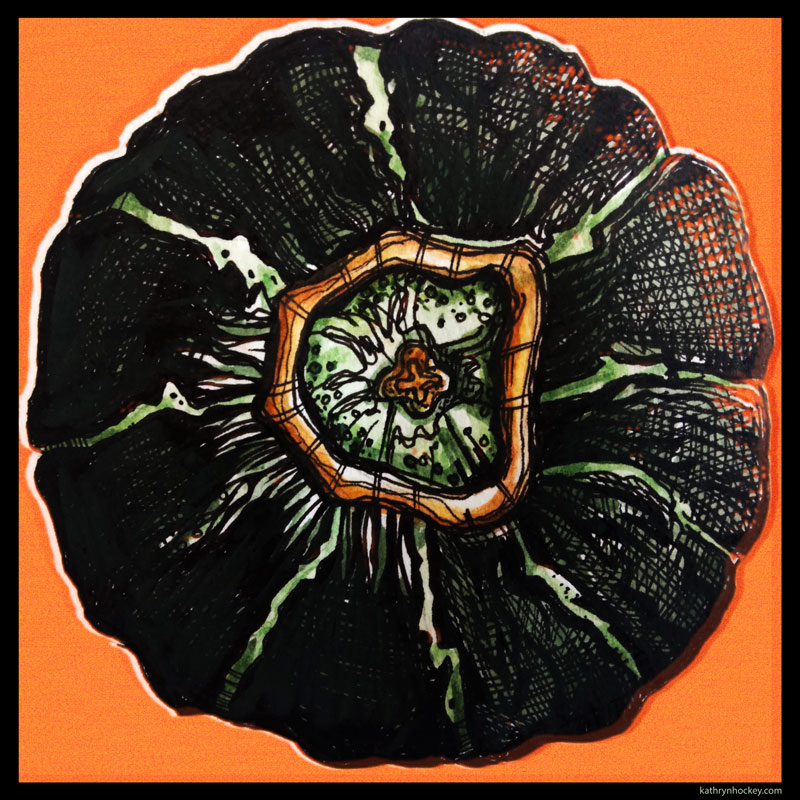 Back at the end of the 1970s, aged 10-11, I had a brilliant teacher for my last year of primary school; Janet Hall. She was a gentle, creative person with flowing hair, flowing skirts and clogs, and she lived on this boat. The Steam Tug Brent. 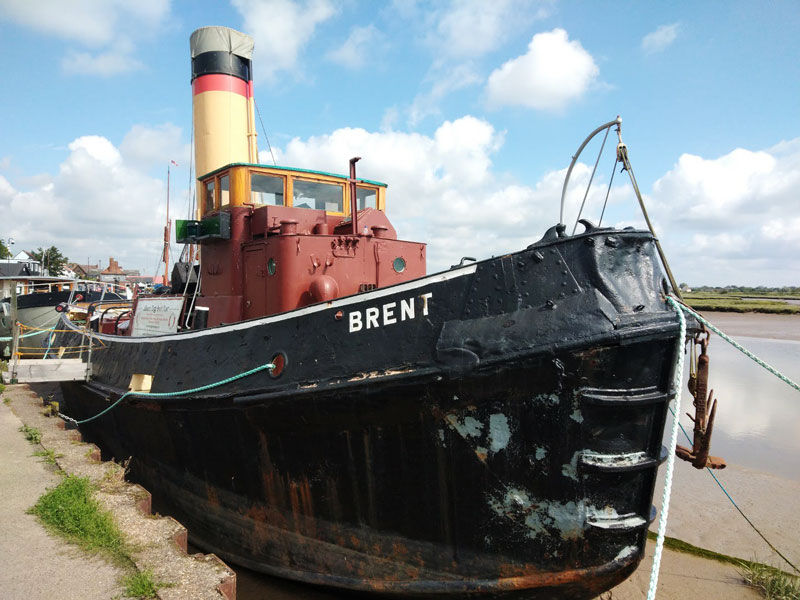 I’ve had the good fortune to have had enjoyed some excellent travel adventures but one of the best was during that last year of primary school. Mrs Hall arranged for our class to travel by boat (not the Brent!) from Maldon to Saint Osyth’s Priory. I still remember that exhilarating feeling of freedom as we skimmed across the water that dark grey morning with a hair whipping wind. Below – my school photo from around that time. 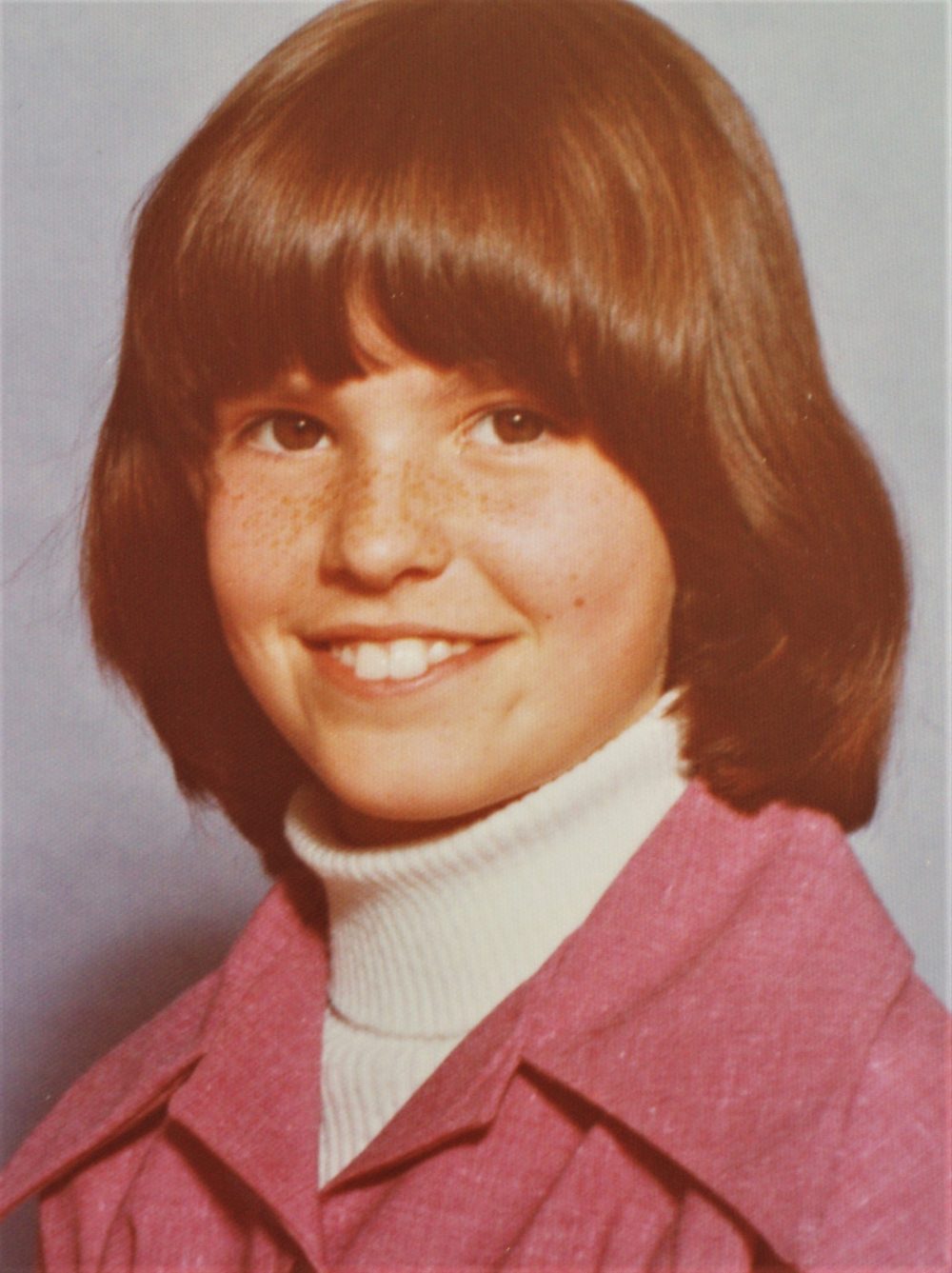 I got back in touch with Janet having returned to Essex after many years away. As luck would have it she was on the deck of the Brent as I walked on Maldon’s prom one day. Once Covid restrictions eased we met for a coffee and caught up on the intervening years.

Janet told me the story of the Brent’s rescue from the salvage yard in 1971, the years when she became the Hall family home through to the Steam Tug Brent Trust being set up in 2010 as a means of raising money and a voluntary workforce to conserve and restore this lovely old boat.

The Brent really is a labour of love and I highly recommend signing up for the supporters’ newsletter where you can see many beautiful photos and read the full story.

The Brent has achieved iconic status after 50 years in Maldon. To celebrate, a group exhibition of Brent related artworks was staged at St Mary’s Church Octagon in July 2021. The range, number and quality of pieces was really impressive; models, paintings on metal and board, watercolours, textile pieces, primary school submissions. Really lovely.

I was delighted to be invited to contribute, I made the pen and wash sketch below and helped to hang some of the pictures in the exhibition space. 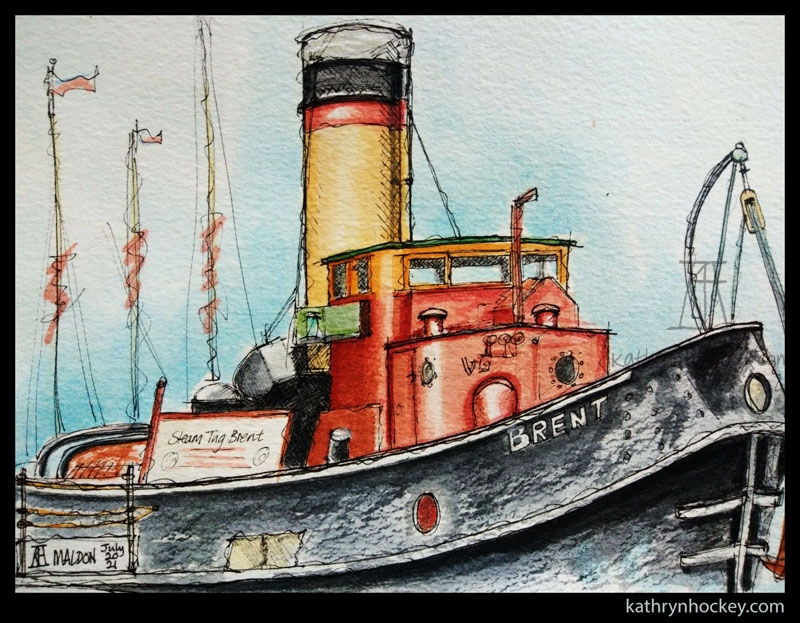 Circumstances, Covid and otherwise, have so far conspired to prevent me from getting on board on one of Brent’s open days. I’d love to have a really good look around, and of course it would be marvelous to see her fully restored and sailing under steam power again one day. 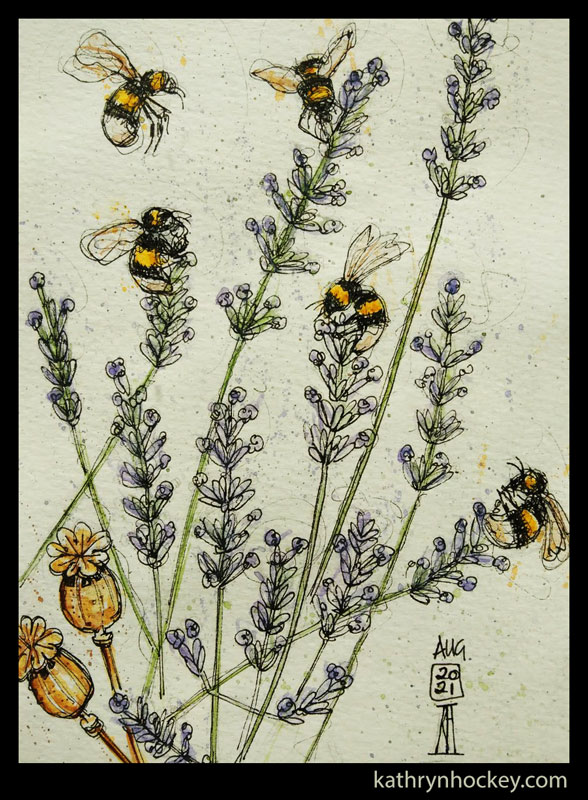 Here are a couple of pen and wash sketches I made in a beautiful Essex country garden this summer, with the bees humming in and about the lavender. 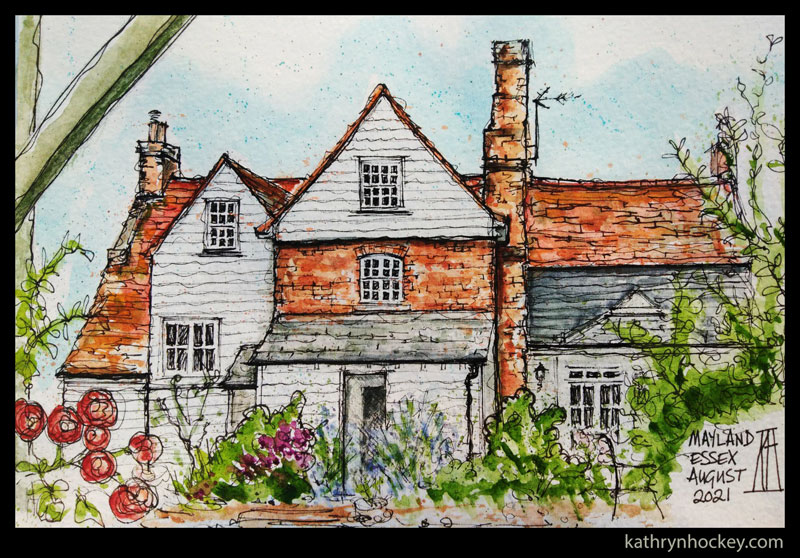 After many years admiring other people’s summer hollyhock displays I finally managed to grow some from seed this year. My Mum loves hollyhocks too, she had collected the seeds from some beautiful plants that were growing out of the concrete at the edge of a car park in town. I think the fact that such delicate but exuberant loveliness can thrive on apparently nothing adds to the wonder of the hollyhock. The name is also a bonus for a Hockey!

I noticed recently that my Mum’s bookmark had been well used into tattiness so I painted her a new hollyhock bookmark for her birthday. 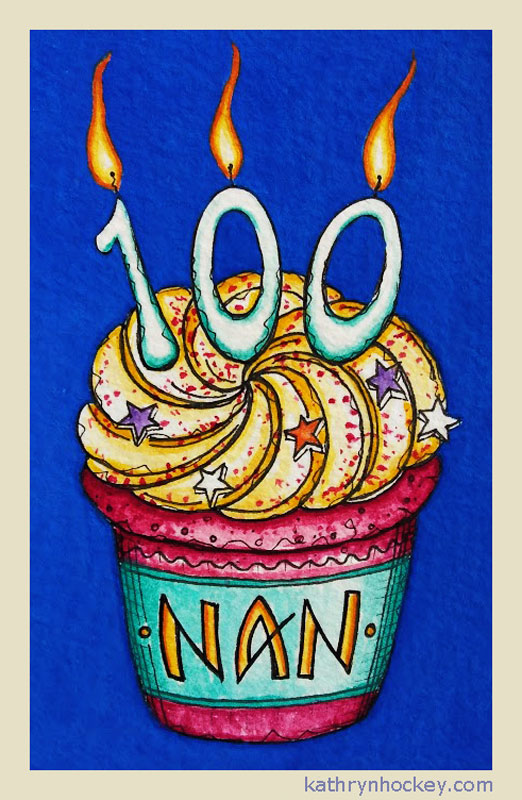 My godmother recently turned 100 – what an achievement!

So I made a bespoke birthday card for her special birthday. 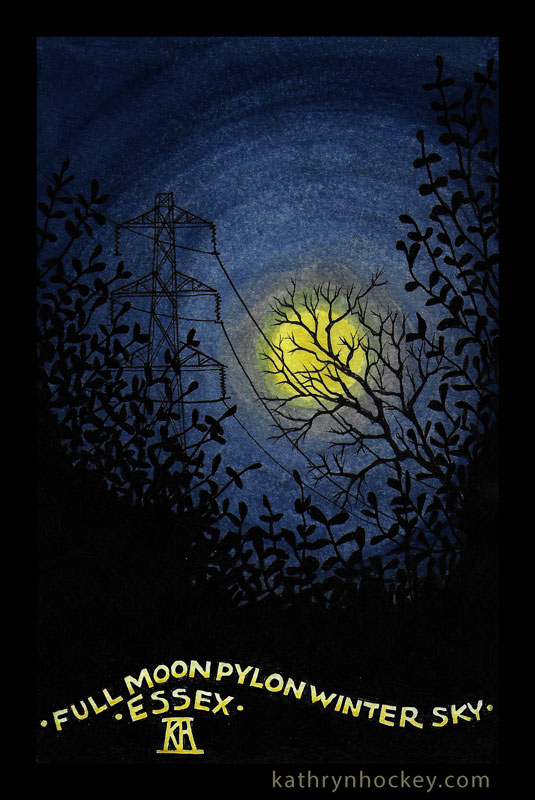 Catching the full moon, as it rises bulbous on a clear night is most uplifting.

It’s so large when it’s low that I can almost feel the weight of its pull. Being made of mostly water I probably can feel that pull…

This is the view over our neighbours’ garden through the evergreen border bushes, and while the pylon may not be conventionally beautiful there’s drama in the contrast of its strict geometry behind the softer silhouette of the branches.

Winter certainly has its consolations. 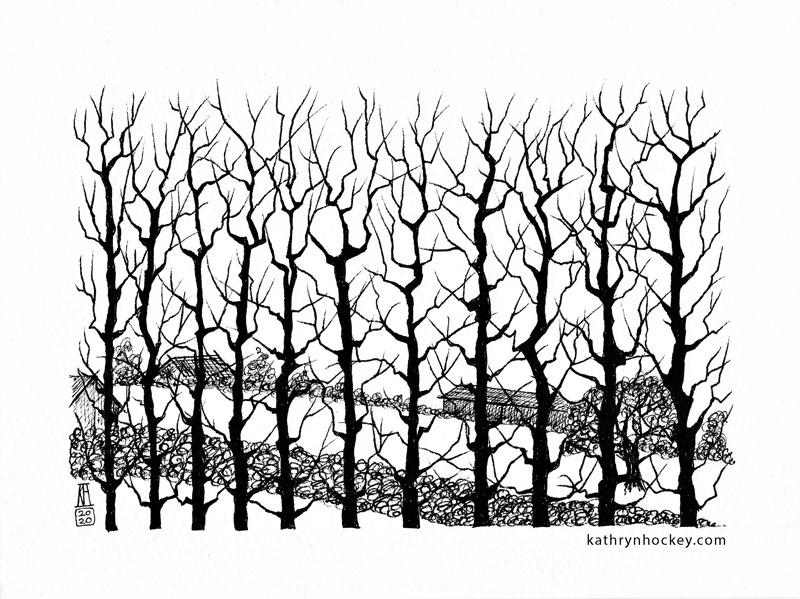 Then I started to pay attention to how beautiful the sky can be as the winter sun sets behind skeletal trees. Its position slightly shifting everyday so that eventually it’s setting over the road and visible from my bedroom window, which has a radiator under it.

So with no discomfort excuses I succumbed to the urge to try and capture this lovely view. I drew the trees in water resistant pen at a leisurely pace and left my sketchbook on the windowsill with my brushes, a jar of water and my paint box so that the next time the sunset was dramatic I could quickly paint the watercolour wash over the top. 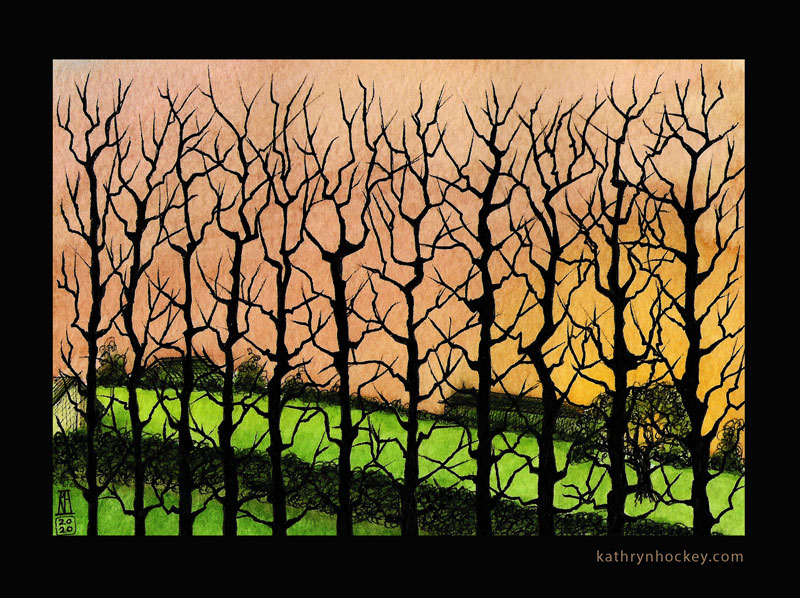 I repainted this version so that I could sell the painting without disfiguring my sketchbook and it’s now my plan to redraw the trees in preparation for a new attempt next time there’s drama in the sky.